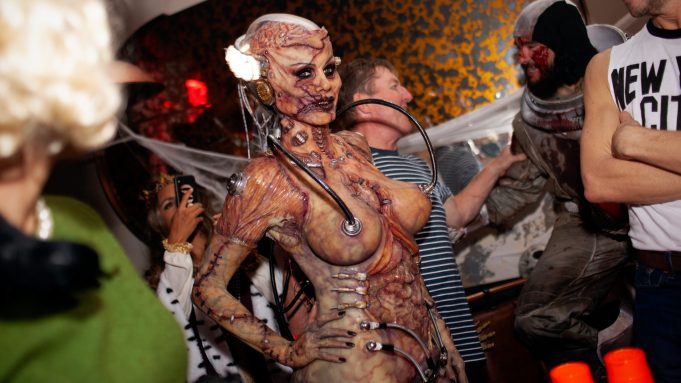 In the 20 years that Heidi Klum has hosted her annual Halloween party, the infamous “queen of Halloween” has always kept spectators guessing what outlandish costume she’s going to wear.

This year, Klum gave fans a peak at her Halloween transformation, camping out at the 34th Street Amazon Books store’s windowfront all day Thursday where spectators witnessed the hours of makeup and prosthetics applications that transformed the German model into what she later explained as a bionic alien.

Klum’s grand entrance began at precisely 11:23 p.m., where she arrived at the new Cathédrale Restaurant in East Village with husband Tom Kaulitz in a hazmat truck. On the red carpet, she hissed and clawed at cameras, showing off her costume’s organ-like prosthetics, stitching and wires.

“Is my brain still glowing?” she asked the group of reporters, stating that the inspiration for the costume came from Kaulitz’s Tokio Hotel band.

“Basically, we’re in outer space looking for a new planet for humans to live on because we have already destroyed ours,” said Kaulitz, who was dressed as an injured astronaut, complete with fake blood and a broken helmet. “I was out touring the universe and I found her. I found this creature and I was like ‘Wow she looks good,’ so I brought her home so hopefully she has some useful information for us.”

“In my exposed brain?” Klum asked him. “The lights are on and somebody is home!”

After 20 years of throwing the bash, guests know they have to bring their costume A-game to impress Klum, and that they did. Jonathan Van Ness dressed as a cat, Hunter McGrady went as Disney’s Ariel, Halima Aden as Maleficent and Ice-T and Coco dressed as a character from “The Purge: Election Year” and Madonna, respectively.

Inside, guests danced along to a set by DJ Questlove — who was dressed as one half of Grant Wood’s American Gothic painting — and sipped on Halloween-themed cocktails before cramming into the venue’s narrow entryway to get a glimpse of Klum making her entrance.

The party also drew in a number of fashion designers, including Joseph Altuzarra, who with husband Seth Weissman dressed as “leather daddies” in anticipation of becoming fathers in three weeks, and The Blonds designers David and Phillipe Blond, who dressed as Batman and Catwoman, respectively.

“We just met Michelle Pfieffer I think last week, which was kind of weird because we already knew we were doing this and we’re completely obsessed with her and the character,” Phillipe said. “Heidi is pretty much the only host that really goes for it as much as we do because once you get into it, you really just have to go for it.”