Cindy Crawford, Bella Heathcote and others attended the opening of the exhibit on Thursday. 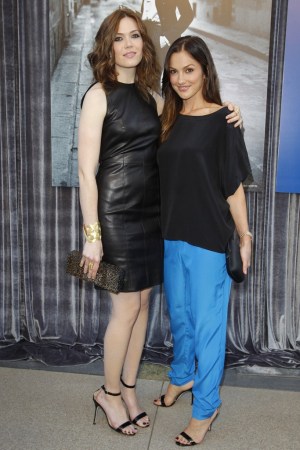 HELMUT HEADS: “I bet a lot of women were looking at the photographs wishing they could have been in one,” said Bella Heathcote of the oversized Helmut Newton prints that were part of Thursday’s opening at The Annenberg Space for Photography of “Helmut Newton: White Women Sleepless Nights Big Nudes” in Los Angeles. The same could be said for some of the men present, ranging from Robert Evans and James Caan to Noah Mills and Jeffrey Deitch. Cindy Crawford actually posed for the photographer several times. “You just never knew what to expect. I mean, in your head you knew that you would probably be in red lipstick and it would be more sexy, but his mind was always going. Helmut had a very playful sense to him, it wasn’t so serious.” Crawford recalled one shoot in Monte Carlo for which Newton brought in blindfolded musicians as she was splayed out on a stage. “It was like playing a character,” she said. “He had this narrative going on in his head that you had no idea about, but that you were honored to be a part of.”