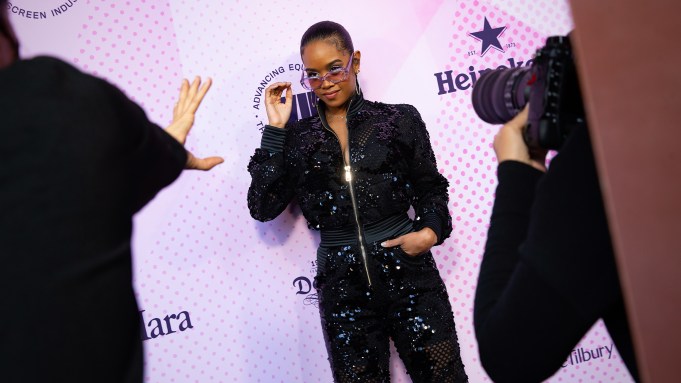 “I still can’t believe that I won an Oscar,” said music artist H.E.R.

The 24-year-old, born Gabriella Sarmiento Wilson, took home the trophy for Best Original Song in 2021 for “Fight for You” from “Judas and the Black Messiah.”

“When it comes to Oscars and achievements like these, I always say that it’s confirmation and it’s not validation,” she went on. “Always know your worth and your value.”

Kicking off Oscar weekend, she was the night’s big-name cohost at Women in Film’s Oscar cocktail party at Bar Lis in Hollywood, held every year to honor women nominees.

Founded in 1973, the Los Angeles-based nonprofit advocates for women working in film and television. When the organization held its first event 15 years ago, there were 30 women nominees. Today there are 60.

“You can see that women and gender nonconforming people are advancing,” said Schaffer.

“Yeah, it’s a crystal in the dress, I’m not just happy to see you,” she teased a reporter.

“I always say this, the moment we realize that we are unstoppable together, the stronger we will become,” said H.E.R., dressed in a sparkly black jumpsuit by Max Mara — a long-standing sponsor of the night.

“To me, it’s all about the women supporting the women,” she added.

Rita Moreno, the 90-year-old “West Side Story” star, was doing just that.

“I came here to be with my friend and to support Kristie Macosko Krieger who produced ‘West Side Story,’” said Rita Moreno, who played Anita in the 1961 adaptation directed by Jerome Robbins and Robert Wise. In Steven Spielberg’s take — up for Best Picture and the Oscar for Directing — she took on the role of Valentina. Ariana DeBose, the favorite to win best supporting actress this year, was his Anita.

“It’s full circle,” said Moreno. “And I know, I know that Ariana is going to receive the best supporting. I know she is.”

Revisiting the film has been “an unspeakably wonderful thrill, moving, hilarious, thrilling,” she said.

Moreno had on a Max Mara top, jacket and dark L’Agence denim trousers, with a pin on her chest.

“Bans off our bodies,” it read in caps.

Later, on stage, she brought attention to the words.

“I’ve had some amazing surprises tonight, which has delighted me beyond anything I can describe,” she said. “Probably one of the best things that happened is when someone said to me, earlier this afternoon, would you wear this?”

Pausing, she added: “This is the kind of Valentina you have in this room.”