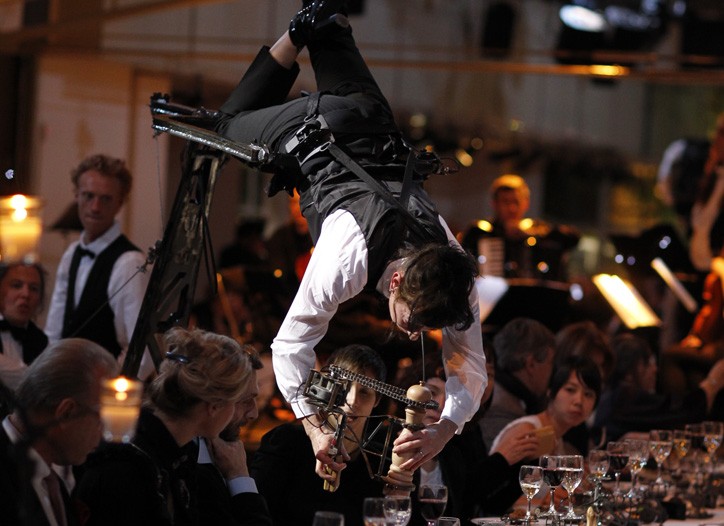 Hermès enlisted François Delarozière, the artistic director of French production company La Machine, to help turn a dinner at its workshop in the Paris suburb of Pantin into a whimsical affair on Tuesday night. The artist, whose firm is best known for marching a 60-foot mechanical spider through the streets of Liverpool in 2008, didn’t disappoint.

Delarozière devised a series of wrought iron machines, including a wheel made of guitars that strummed as they whirled, to entertain guests, and the night’s waitstaff performed acrobatic feats such as grinding pepper upside down from a rig and dropping sugar cubes in coffee cups via giant fishing rods. Bread rolls, meanwhile, were delivered by catapult, prompting Hermès artistic director Pierre-Alexis Dumas to advise: “If you see a piece of bread flying in your direction, catch it, because otherwise it will hit you straight in the face.” The meal-cum-performance art helped ring in 2011, which Hermès has dubbed the year of the contemporary artisan.

Though the theme for 2011 was chosen long before LVMH Moët Hennessy Louis Vuitton acquired a 20 percent chunk of Hermès — and raised fears of a takeover attempt — it fit nicely with the qualities Hermès family shareholders like to think separate the luxe house from the rest of the crowd.

“This year, more than ever, it is good to remember that Hermès stands for a different kind of luxury, a quality which shines from the inside to the outside of every object we make,” Dumas, a descendant of founder Thierry Hermès, asserted.