Champion riders flocked to northern California for the event. 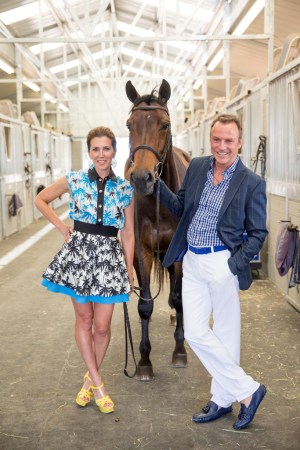 San Francisco socialites and championship equestrians from across the country descended upon Petaluma in northern California on Saturday for the fifth annual Giant Steps Charity Classic. The event, which showcases top regional and national championship riders, is the culmination of a week of fiercely competitive jumping.

Marissa Mayer with her husband Zachary Bogue, Alden Corrigan, Ashley Herman, champion junior rider Ransome Rombauer, and Gwen McCaw were among the guests who came to the Hermès-sponsored event (while other brands with equestrian heritage have sponsored in the past, this was Hermès’ first go at it). Sloan and Roger Barnett, major sponsors, hosted the gala dinner and exhibition riding.

This year, event designer Colin Cowie partnered as a presenting sponsor. “I love everything to do with horses,” said Cowie, who dazzled guests with chic décor and ivory pashminas to ward off nighttime breezes. “The gala is an elegant way to showcase champion horses, and to show how horses can have a beautiful therapeutic effect on many people.”

Meanwhile, Barnett herself has spent the week winning hunter/jumper awards.“It’s been quite a week of jumping,” Barnett said, which would be an understatement. She’d been in the ring the morning of the gala, and was competing again on Sunday. Keeping it all in the family, meanwhile, her daughter Violet, 13, was competing and winning in junior classifications all week, and had then headed to the East Coast for more medal competitions.