Hermès Shows Off Its Means of Production 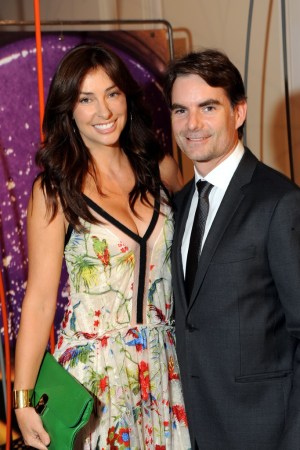 “The handle takes about four hours to make; it’s the most important part of the bag,” explained Pierre, a leather worker in an industrial-strength apron who Hermès had shipped from its French atelier to New York, on Tuesday night. He was using a heat knife to notch the little red strip that would fasten the strap of one of the company’s Kelly bags to its body — although that would take a few more man hours at least. At a similar workspace across the vaulted ground floor of 583 Park Avenue, two middle-aged men with their ties tucked behind white smocks demonstrated the house’s screen-printing process for silk scarves. Another sat at a desk with the inner workings of a watch and tiny tools splayed across it. At yet another, tie patterns hung from wooden racks, behind which a serious-looking woman with a blonde bob pinned and cut away.

Hermès, purveyor of such ultraluxe accessories, had from the looks of it gone to great effort and expense to turn the event space, housed in a stately neo-Georgian building on Manhattan’s Upper East Side, into its Festival des Métiers, an open studio where its artisans plied their trade in public. It was a sort of Wonka factory for the ladies Who Lunch. (The display will be open to the public through Sunday before moving on to San Francisco and Houston.)

And ladies there were, or clients in the house’s preferred parlance. Aerin Lauder, Jamie Tisch, Lisa Airan, Julie Macklowe, Allison Sarofim, and Jennifer Creel were all on hand, as was Stephanie Winston Wolkoff, whose SWW Creative helped put on the show. More than a few brandished their own Kelly bags or Hermes wallets.

After cocktail hour, guests and artisans alike made their way downstairs, where they dined on truffled cauliflower soup and Chilean sea bass. When Hermes US chief executive officer Robert Chavez gave a brief toast and made light of the company’s habit of testing its clients’ patience, the laughter in the room could fairly be described as “knowing.” (It’s worth noting that when Hermes managing director, and sixth generation family member, Guillaume de Seynes made his own toast he seemed to make oblique reference to the family’s ongoing battle with minority shareholder LVMH Moet Hennesy Louis Vuitton. “We all share the passion for this house and we all want it to continue still with this same dedication to quality — at least that’s the mission we have,” de Seynes said.)

After dessert and a brief, animated performance by the violinist Eugene Draw, waiters placed grapefruit-sized chocolate eggs at each table. Guests needed no invitation to split the thing open with a drop of the clear plastic hammer that accompanied each.

Inside, they found more chocolate.