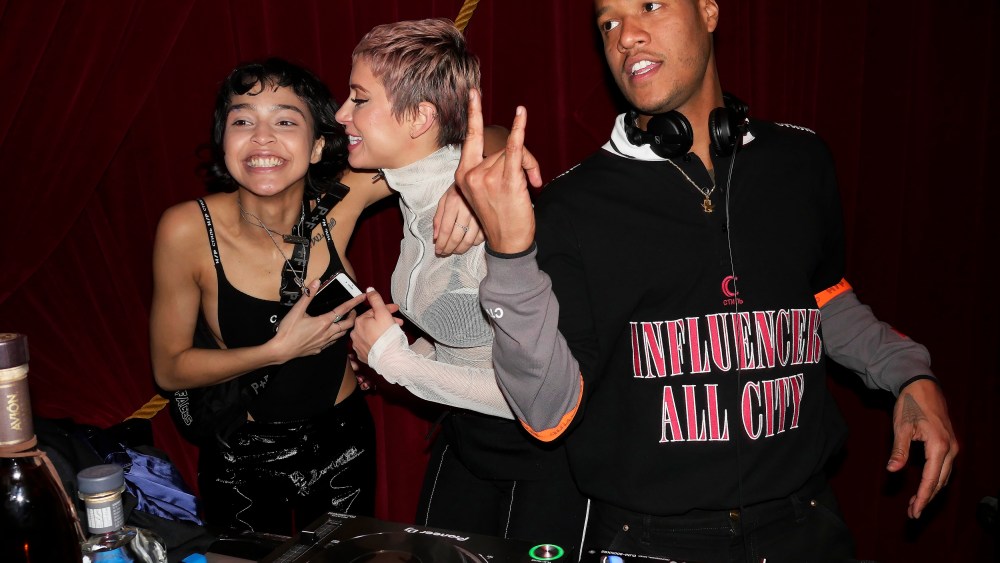 Heron Preston might’ve shown his collection earlier this year in Paris, but that didn’t prevent him from joining in on the NYFW fun. Tuesday night he gathered friends together for dinner and an after party at the Public Hotel, in honor of his “Public Figure” collection.

Preston was joined by Joey Badass, Kehlani, Luka Sabbat, Justine Skye and more. New collaborator Justin Timberlake was a no-show, though the dinner playlist kept plenty of his older songs playing; another promised guest was Dennis Rodman, who, it was learned, was unable to make it due to him being in rehab.

“The goal was to just bring all of my friends together. I showed the last collection in Paris, and I live here, I’ve lived here forever, so when it came time to thinking what I should do, I was like ‘Man, I just want to bring my friends together, have a dinner and have a party,’” Preston said. “I like to cast the net and do everything everywhere. A little sprinkle in Paris, a little sprinkle here. I feel like we live in one world.”

Preston admitted that he hadn’t been able to keep up with much of NYFW this week as he’s been in the process of moving from the Bowery to DUMBO/Vinegar Hill.

“I just heard about the Calvin show tonight, walking through the popcorn. I thought that was rad,” he said.

Sabbat lingered late at dinner, opting to skip out on the lower party. After a two-week absence he’ll be back on “Grown-ish” tonight for a “Teen Vogue-themed” episode, he said. “It’s cute. I’m not going to say too much because I want people to watch it…the more views, the better for me.”

Sabbat, who is at work on books, photography, furniture and a short film, said he doesn’t plan to join the fashion industry anytime soon.

“We don’t need another brand. I’m not here for that. I’m 20 years old, I have literally all the time in the world,” he said. “We need more content from people my age; we don’t need another hoodie or another pair of pants with stripes down the side.”

He also noted he is too closely tied to fashion at the moment to remain original.

“I’m in so many showrooms and too many clothes for me to make my own clothes. I don’t want to be caught up, because you might not mean to rip somebody off but a piece of clothing might retain in your head as a piece of information and then six months down the line you do something that somebody just did,” he said. “I’m around too much s–t for me to do my own brand.”

As for what draws him to Preston?

“There’s a difference between what is cool and what’s good. It’s a thin line…good brands make bad things, but people will still be like ‘oh that’s sick’ because it’s a cool brand,” he said. “But brands that nobody knows make cooler s–t but nobody is like ‘oh that’s sick’ yet, because they don’t have that factor behind it that brands like Balenciaga or whatever do. What’s interesting with Heron is that he’s been at it for a really long time. I’ve known him since Been Trill. So my opinion is going to be biased because that’s the homie.”

World Traveler Paris Hilton Touches Down at Monse After Party

Next Up in the Industry? Ellery Harper, Laura Dern’s Son