The two were among the recipients Sunday of the Smithsonian's Portrait of a Nation prize. 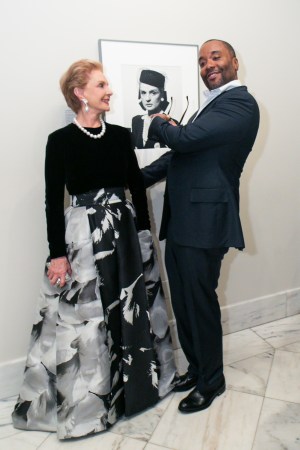 WASHINGTON — Praised for capturing the confidence of the American woman, Carolina Herrera was given the Portrait of a Nation Prize at the Smithsonian’s National Portrait Gallery here on Sunday night.

“No one has done more to bring elegance to America than Carolina Herrera,” said Steve Hamp, chair of the Gallery’s Commission, at the museum’s inaugural gala.

But Herrera’s friend, the film and television director Lee Daniels, sees a different side. “What’s great about her is that she’s so chic, but at the same time, she’s….”

“Yes. She’s naughty, but you would never know it. She’s the ultimate lady,” Daniels told WWD before the dinner, where he was seated next to Herrera and her daughter, Patricia Lansing.

Herrera and Daniels whispered and giggled throughout the evening, like old school chums, although they just met at a film festival this summer.

He’s already recruited Herrera to bring her “elegance” to his next film about Richard Pryor, starring Kate Hudson, and she’s become a fast fan of his glam series on Fox, “Empire.”

Who’s the best dressed character on the show?

“None of them are Carolina Herrera. They’re ghetto-fabulous. There’s a difference,” Daniels informed her, wryly.

“Lee is the best person to talk to about anything because he’s so creative. We jump from one subject to another,” Herrera said.

He tried to get her on the dance floor during a fiery performance by fellow honoree Aretha Franklin, but she demurred.

The prize was awarded to four other individuals whose portraits are in the gallery’s collections and who exemplify achievement in sports, art, service, business, and entertainment. Along with Herrera and Franklin, record-breaking athlete Hank Aaron, Marine Medal of Honor Recipient Cpl. Kyle Carpenter, and artist Maya Lin, the designer of the Vietnam Veterans Memorial were saluted.

Herrera’s portrait was created by another friend, the late Robert Mapplethorpe, in 1979. “I think he’s one of the best photographers of the century. He could do anything,” she said, admiring the piece with the gallery’s director Kim Sajet, in billowy Herrera navy. “This was his favorite. I’m glad it’s here for the public. He would be so happy.”

The gala raised $1.74 million to establish an endowment for exhibitions at the National Portrait Gallery.

“I was thrilled to see you get that appointment,” Franklin called out to music-enthusiast Sotomayor between performing her diva classics, like “Think.”

After her last number, the queen of soul forgot her handbag by the piano. She reappeared a few moments later, saying, “Don’t forget the purse, baby.”