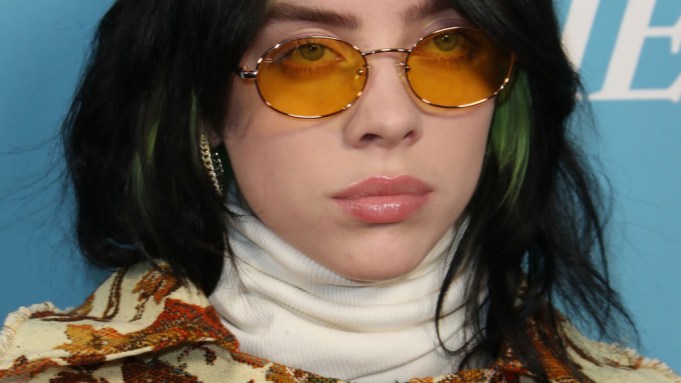 “We are breaking every fire code in this room right now,” said songwriter and OneRepublic lead singer Ryan Tedder accepting his award for Songwriter of the Year in Los Angeles at Variety’s third annual brunch celebrating hitmakers of the year on Saturday afternoon.

The elbow-to-elbow schmoozing was seemingly at an all-time high at Soho House in West Hollywood, where some of today’s biggest names in music, executives and artists, mingled inside. There was Lil Nas X of “Old Town Road” fame, who handed Tedder his award; K-pop sensation BTS, who received Group of the Year; Kacey Musgraves, introducing her manager Jason Owen; Julia Michaels, who took home the “Citi voice of impact award”; Megan Thee Stallion, the Breakthrough Artist; Swae Lee of hip-hop duo Rae Sremmurd, the Crossover Star; YG and Tyga, who received Hook of the Year for their hit “Go Loko”; Ellie Goulding, the Decade Award recipient, and the publication’s cover subject, 17-year-old star and Hitmaker of the Year Billie Eilish, who was sitting front and center with her parents and Finneas O’Connell, her brother and collaborator.

“When we were working on the album, somebody told me and my brother, Finneas, who’s my cowriter, that [there] were no hits on the album,” shared Eilish, who wore a matching oversize ensemble, her signature look — this one by L.A.-based brand The Incorporated. “I don’t know what that was supposed to do. I don’t know how that was supposed to help anyone. But that fool was wrong.”

Eilish is making history at the upcoming Grammy Awards as the youngest artist to be nominated in all four major categories. In total, she’s up for six trophies, including Best New Artist, Album of the Year for “When We All Fall Asleep, Where Do We Go?” as well as Song of the Year and Record of the Year for “Bad Guy.” After a round of thank you’s, she brought O’Connell on stage.

“Get your ass up here,” she said. “Finneas is my best friend, my big brother….We started writing music together when I was 13, and he was 17; he produces everything. I think he’s the only reason I’m anywhere in the whole world. He’s probably the only reason I’m alive.”

The day brought out producer Wheezy, who’s had several Grammy-nominated projects, from working with Bon Iver to 21 Savage. He has also collaborated with the likes of Drake, Future and Migos. In 2020, he’ll be releasing his own music. “I’m bringing this new romantic trap,” he shared, wearing Gucci. What will that sound like? “Just imagine a rooftop dinner in the ghetto.”

Also working on her own project, as well as headlining her own tour next year, is singer-songwriter Tayla Parx, who’s nominated for Album of the Year at the Grammys as cowriter on Ariana Grande’s fifth studio album, “Thank U, Next.”

“The special thing about Ariana is realizing you’re being a part of somebody’s evolution, emotionally,” shared Parx. “Even outside the career, you’re watching this person kind of break down and rebuild themselves. It’s beautiful to be part of that journey.”

Goulding, too, is working on releasing new music. Her fourth album is expected to be released “by end of March” next year. “It’s the best music I’ve made,” she shared, donning Angel Chen. “I’ve spent a lot of time on it, and it’s very honest.”

Of all the hits this year, perhaps one of the biggest impacts in music, with its merge of hip-hop and country, was Lil Nas X’s remix of “Old Town Road” with Billy Ray Cyrus, which has more than a billion streams on Spotify alone. Jocelyn Donald, known as Jozzy — who wears several hats as rapper, songwriter and producer — wrote Cyrus’ verse in the single.

“I was like, ‘We’re going to make you a rapper,’” she said of Cyrus. “’You’re not going to be a country singer. I’m gonna make you rap.’ We turned his verse into rap bars but still with a country twang. I wanted to make him the total opposite of what you think Billy Ray Cyrus is like. No moonshine, no cowboy hat. ‘Ridin’ down Rodeo in my Maserati sports car,’” she continued reciting the lyrics. “I wanted to kind of bring him into the culture. He was so cool with it. He never said no.”

Of the controversy surrounding “Old Town Road” getting pulled off Billboard’s country charts and certain country stations refusing to play the hit, she said: “At the end of the day, it’s a black guy doing country. A young black guy from Atlanta. Come on, we know how the world is.”

The remix is the longest-running number-one song on Billboard Hot 100, leading the charts for a record-breaking 19 weeks.