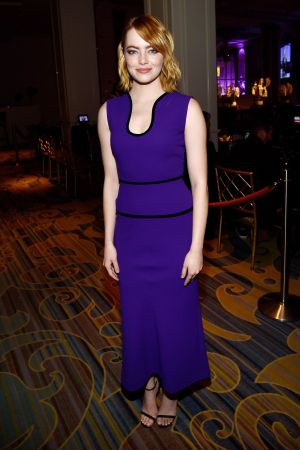 “It was very nice of the Hollywood Foreign Press to have Jamie Lee Curtis open for me—thank you. I think she’s going to go places,” Justin Timberlake said onstage at Thursday’s HFPA annual grants banquet at the Beverly Wilshire hotel in Beverly Hills. The actor and Curtis, the evening’s emcee, were joined by a slew of stars, including Emma Stone, Vince Vaughn, Mel Gibson, Renée Zellweger, Jurnee Smollett-Bell, Gina Rodriguez and Nate Parker as they handed out nearly $2.4 million in grants to nonprofit entertainment organizations and scholarship programs like the Sundance Institute Feature Film Program, AFI’s Conservatory Directing Workshop for Women and the Pablove Foundation, which aids kids and families battling pediatric cancer.

“I didn’t know this event existed, actually. I’ve been out of touch,” Hugh Grant told the crowd. “I had no idea the Hollywood Foreign Press gave out all this money. I didn’t even know you had all this money. I find it frighteningly sinister that you do.” Added Curtis, “This is my favorite party to go to. I like a party where they invite you, they feed you and they give away $2 million.”

While plenty stuck to the script, a few couldn’t help but get giddy over the actors who turned out for the hour-long presentation. “I’m very excited to see Renée Zellweger!” Stone squealed, after being presented by the “Bridget Jones’s Baby” star.

Before the ceremony, Mandy Moore said she loved to be able to give back. “We know the HFPA for throwing a great party like the Golden Globes, but [it’s wonderful] to be able to highlight the great work that they’re doing,” said the actress. “I’m a kid who was lucky enough to go to theater camp, and had I not had the opportunity, I don’t know if I would have found my way into this profession.”

Philanthropy aside, some couldn’t believe the night signaled that award season is practically around the corner, with “Mr. Robot” star Christian Slater still on cloud nine over the show’s recent Emmy nomination. “It’s a thrill,” he told WWD. “You never know how something is going to be received when you sign on. I think it has humbled us all.”

Milo Ventimiglia chatted about the anticipated “Gilmore Girls” Netflix reunion. “For however many years the show has been off the air, the fans dream up these scenarios…. I think everybody needs to put all of that to bed now. They’ve got four 90-minute movies coming up. Sit back and enjoy.”

Warren Beatty closed out the night accepting an award on Martin Scorsese’s behalf, for the director’s work with The Film Foundation. “You probably don’t know this, but I actually lived here for 12 years,” Beatty reflected. “I always love coming back to this hotel.”