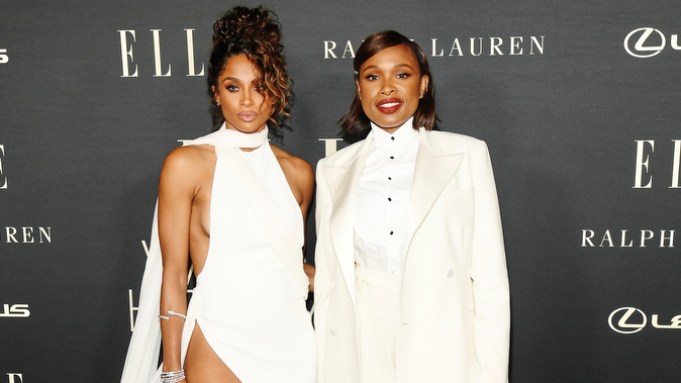 While some of the honorees were MIA — Jolie, Chan, Ridloff and Hayek (the four cast members of Marvel’s “Eternals” pulled out due to possible exposure to COVID-19), as well as Comer — the occasion brought out host Eva Longoria, Demi Moore, Kerry Washington, Ciara, Lena Waithe, as well as Hollywood’s rising stars, including Mj Rodriguez, Lexi Underwood, Mose Ingram, Karen David, Odeya Rush and Alexandra Daddario. Hailey Bieber and Addison Rae also came to lend their support.

Here, the most noteworthy moments from the night:

“Wonder woman 1984” star Gal Gadot began her speech by poking fun at herself; she bursted into song, belting John Lennon’s “Imagine.” For those who don’t recall, in March of last year during the earlier days of the pandemic, Gadot famously released a three-minute clip online where she and her celebrity friends took turns singing a rendition of the song. The gesture fell flat, and she was highly criticized for the video.

Kicking off the night, emcee Eva Longoria took the moment to recognize Kerry Washington. “I know I wouldn’t be here or anywhere in my career if not for the support of all these women in my life,” Longoria said. “One woman in particular who has supported me in my career is Kerry Washington.” She went on to explain that they’re working on a movie project together, the upcoming comedy “24-7” for Universal Pictures. While meeting with potential directors and not seeing a fit, Washington often turned to Longoria and asked: “Why don’t you direct it?”

Longoria continued: “She convinced me that I was ready. And she worked on the pitch with me. She rehearsed it with me. She wrote it with me. And I remember we were pitching at Universal Pictures…she saw I froze. I was just so nervous, and she stepped in….She made it a point to mention that she’s worked with some of the best directors in the industry, [Quentin] Tarantino, Spike Lee, Ava DuVernay. She said, ‘I know directors.’ And then she did something that changed everything. She said, ‘No one is better for this job than Eva. Her words of confidence in me gave them confidence in me, but more importantly, her words gave me confidence that I needed to find in myself. It still makes me emotional. That is the kind of power that women have when they unite. When we build each other up and set a foundation for generations of women to come.”

Lena Waithe, who introduced Halle Berry, brought the laughs as she recounted the moment Berry told her she planned to make her directorial debut, as well as act, in Netflix’s “Bruised,” where she plays an MMA fighter.

She was protecting her friend, she said, but she was wrong: “I’ve just seen this amazing film earlier today. She got mad at me, because she wanted me to send a voice note telling her it was amazing before we came.” Looking at Berry in the audience, she added: “I wanted to tell you in person. The film is amazing. And I’m so happy that you did it. Thank you for not letting my fear choke your dream.”

When Berry took the stage, she gave her take: “[Waithe] said, ‘Have you ever shadowed a director?’ ‘Nope.’ ‘Do you know how hard it’s going to be?’ ‘Yeah…’ ‘Do you know you’re going to be up all night making shot lists and acting? There’s no way you can do that.’ She said, ‘What you ought to do, you see, is let me rewrite it…’”

When she was 14 years old, Demi Moore visited Coatzacoalcos, Mexico, she said. And years later, when she met Salma Hayek, Hayek asked her: “’Have you ever been to Coatzacoalcos?’ and I said, ‘Yes, actually, I think I have. It was a really long time ago.’ And [Hayek] said, ‘You know, I’ve been waiting for this moment for a very long time. When I was a little girl, I remember knowing all about the gringa girl who came to my town and became an actress. And it made me realize, because a normal girl was up on the big screen, then I had the possibility to achieve that.’ My point of this is that you can never know or imagine the impact you can have on someone.”

Rita Moreno commanded the room, garnering applause and bringing everyone out of their seats when she took the microphone. After being presented by Kerry Washington, the Puerto Rico-born, 89-year-old American actress (who will next be seen in Steven Spielberg’s take on “West Side Story”) addressed her fellow actress and said, “You look f–king gorgeous. How dare you!”

Washington, standing on the side of the stage, turned her back to the audience, giggling.

“Even your ass is cute,” joked Moreno.

On a more serious note, Moreno discussed her younger years and experience at MGM, telling the crowd: “For the most part, my roles were deeply disappointing. I played characters like Island girls, Indian maids, way too many señoritas, and usually as a white man’s mistress, with made-up accents….This did not feel good. It haunted me.” But, she said, “Dreams don’t fade. That’s why they are called dreams. So, you see, my career did not jump on an express elevator right here all the way to the top…but, what a ride.”