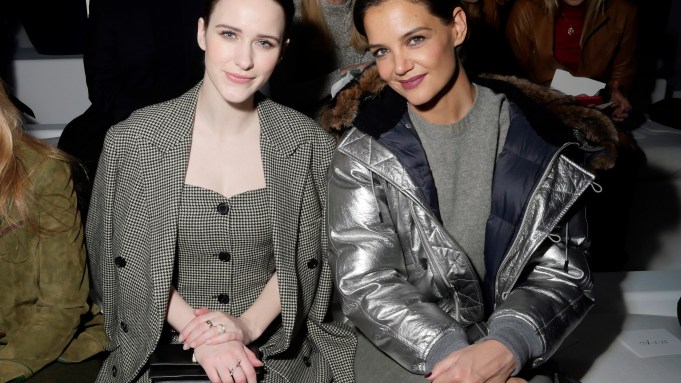 “Relaxed” is not typically a word floated around in the minutes before a runway show begins, but that is how Rosie Huntington-Whiteley described her fashion week thus far, when asked Monday morning at the Ralph Lauren show.

“For me, Ralph is the quintessential all-American brand,” Huntington-Whiteley said. “It’s timeless, it’s elegant. Every time I wear a piece of Ralph Lauren I feel my best.”

Swank emerged from photographers and briefly undid the gray Ralph Lauren coat she was wrapped in for the show to cool down.

“‘Boys Don’t Cry’ came out in 2000, and so it’s just over the last two decades that I’ve been wearing Mr. Lauren’s stuff,” she said. For her own sense of style, she tries to keep it “effortless.”

The actress said that though she’s a dedicated sports fan, she hasn’t had much time to watch the Winter Olympics since they began on Friday.

“I’m not watching…I don’t have a television, but had wanted to watch. I love sports — I mean, love,” she said.

Brosnahan took time from pre-production on season two of her Golden Globe-winning role in “The Marvelous Mrs. Maisel” to come out to the show, in a three-piece suit ensemble.

“I grew up, first of all, very jealous of all of the models’ hair from the Ralph Lauren campaigns,” she continued. “I’ve always loved the brand’s simplicity; it’s timeless, it’s beautiful and feminine and strong. It’s my favorite combination of things. I met Ralph for the first time backstage just now. He’s an icon — it was very, very cool.”

She kept mum on season two spoilers, but revealed they will be heading to Paris to film some scenes.

“I’ve heard that Amy [Sherman-Palladino, the show’s creator] has been spilling the beans a little bit…I’ve heard that Amy has been teasing a little that Susie and Midge will hit the road at some point,” Brosnahan said. “But I looking forward to watching Midge struggle to balance her three very different conflicting worlds: her world as a mother and a daughter, and a housewife — question mark — and her new world as a working woman, with a job that she loves.”

Springsteen was in from Wellington, Fla., where she’s been competing in equestrian competitions in 85 degree heat.

“It’s actually very nice to go outside and feel a little cold,” she said of New York’s conditions.

“My mom used to buy the little knit sweaters for me and my brother with the little American flag on them when we were kids,” she added of Lauren. “We would wear them all around the beach. I’ve always worn the polo shirts riding. They have such an equestrian heritage to the brand.”

She historically has avoided wearing equestrian-inspired looks when out of the saddle, but she makes an exception for Ralph Lauren.

“Now that I’m older I really appreciate the beautiful blazers but when I was younger I used to never want to wear them because I’m riding in them every single day,” she said. “It’s funny because my friends will come over and be like, ‘Can I borrow your riding pants, please?’”

In the Company of Off-White c/o Jimmy Choo