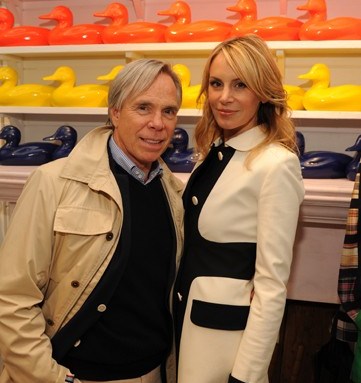 “We wanted to do a pop-up shop,” Tommy Hilfiger explained on Wednesday night from the entryway of his prefab New England beach cottage. “But not like everybody else.”

There didn’t seem to be any danger of that. The house had quite literally popped up over the course of a night — not on some East Hampton shore but on the corner of Little West 12th Street and Ninth Avenue in Manhattan. The event included an after party at The Standard across the street.

“Where else could we have really launched Prep World?” Hilfiger wondered aloud. Lisa Birnbach, author of “True Prep” and co-host Wednesday evening, overheard and laughed. “Anywhere?” she replied, gesturing at a chandelier made of vintage wooden tennis racquets. “But this is certainly very appropriate.”

“We have a few of these,” Hilfiger said, gesturing to where the cottage had been bolted together with one arm while his other circled the waist of his wife, Dee. “They fold right up, the cottages. We are going to have them in Paris, London, Amsterdam, Milan, Stockholm, Madrid, Sylt — do you know Sylt? It’s a seaside town in Germany. Never mind, it’s beautiful. Knokke, in Belgium, and Tokyo. Actually, my wife and I are getting on a truck tomorrow.”

The designer stopped himself to laugh while Dee Hilfiger cocked an eyebrow at him in confusion.

“I mean a plane, we’re getting on a plane to London tomorrow,” he said. “Not a truck. To see one of our Prep Worlds there. We’re everywhere.”

Indeed they are, for the next night the Prep World cottage popped up in London. It takes a special person to get Ronnie Wood out of his rocker’s garb and into East Coast weekend wear, but Hilfiger pulled it off. He gave the Rolling Stone a prepover — and Wood was pleased. “I’ve been wearing this outfit all day, to all my meetings. I love it,” said Wood, who sported a lime green sweater, navy cotton jacket and blue jeans. “And these shoes feel like slippers,” he added, pointing to his bright green brogues.

Wood joined Birnbach and guests including David Tang, Luke and Harry Treadaway, Ed Westwick, Florrie, Tali Lennox and Amber Atherton. “I’m all about this lifestyle,” said Westwick, the British actor and “Gossip Girl” star, who’s based in Manhattan. “I spend all my weekends in the Hamptons.” Westwick just finished filming “J. Edgar,” a biopic about the infamous FBI chief J. Edgar Hoover, and said working with director Clint Eastwood was a dream. “He’s a true gentleman,” he said.

Actor Luke Treadaway was fresh from a night on the red carpet this week for the London premiere of “Attack the Block,” about a teen gang in south London defending their block from aliens. “I basically play a posh idiot — which wasn’t too hard,” he said. “A lot of my friends are like that.”

Now that he’s dressed Ronnie Wood, Hilfiger said at a dinner later that evening his next prepover target is “Silvio Berlusconi, then the Sarkozys.’’