The Presidential candidate gave an award to Melanne Verveer. 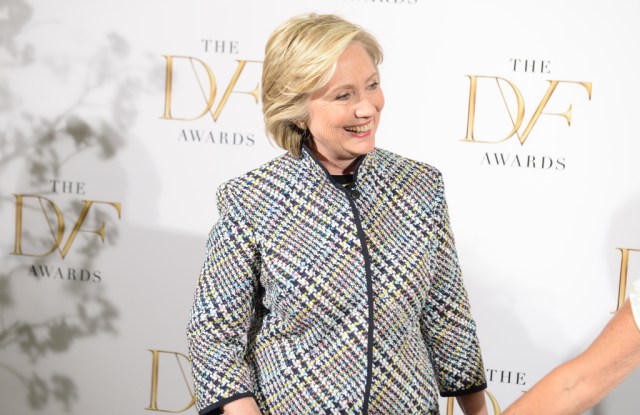 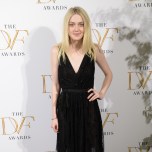 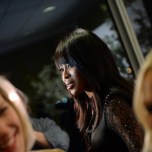 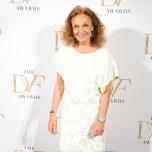 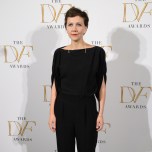 NEW YORK — Hillary Rodham Clinton brought her presidential candidacy to the sixth annual DVF Awards on Thursday night at the United Nations, where it has been held since the event’s inception in 2010.

A previous DVF honoree herself, now on presenting duty, the appearance marked Clinton’s first New York appearance since unveiling her candidacy two weeks ago. While she opted to skip the press room — where fellow presenters Naomi Campbell, Maggie Gyllenhaal and Dakota Fanning made the rounds — Clinton’s presence was immediately known. Upon entering the room, security in tow, she was swarmed by fans. Naturally being a presidential candidate, she exchanged pleasantries and even posed for a few selfies. Upon finding her seat, the former First Lady hugged seat mate Gloria Steinem. The two huddled in conversation before Clinton was tasked with presenting the first award of the night to Ambassador Melanne Verveer. “There are no fewer than a thousand stories that I could share about Melanne, but she is giving me the sign across the neck at this moment,” said Clinton, before segueing into the issue at hand: women’s rights. “We have seen progress, and I think it’s important to recognize and acknowledge that. Health and education experience has gone up. The rate of maternal mortality has been cut in half. Global gender gap in primary school experience has been closed nearly. And Melanne has been there at every step of the way – from the White House to Vital Voices to serving as the first ever global ambassador to women’s issues. She marched into every corner of the world. It used to be, and still is, that when I travel, I’m often greeted by someone saying, ‘Welcome, Eleanor Roosevelt was here.’ Now, I’m as likely to be greeted with, ‘Ambassador Verveer was here.’ Everywhere women need a champion, she shows up.”

Other honorees for the evening included Adimaimalaga Tafuna’i of Women in Business, Samar Minallah Khan of Ethnomedia, Becky Straw and Jody Landers of the Adventure Project, and Gabrielle Giffords, with guests such as Alexi Ashe and Seth Meyers, Annette de la Renta, Hannah Bronfman, Steven Kolb, Devon Windsor, Barry Diller and Lily Kwong coming out to show their support.

“The situation for women is not great — there is a lot of work to do right now,” von Furstenberg told WWD of the fuel behind the women’s rights-centric event. “This award helps a few women get exposure and give them money — the more everybody can help, the better.”

Added Gyllenhaal, “This is a particularly interesting event because it’s focused on women supporting women. I feel like there is something interesting going on right now about feminism and femininity and sexuality. Something is shifting in the ground.”

For Campbell, the evening was not only an opportunity to honor the award recipients, but to support von Furstenberg herself. “My first meeting with Diane was her taking me to the Four Seasons restaurant when I was 17 and she said, ‘Listen.’ And she really is someone I do listen to and knows me very well. I have the utmost respect for her.”

Von Furstenberg later took to the stage to present the last award of the evening, the Inspiration Award, to Giffords. The former U.S. representative provided the shortest speech of the evening. “Ending gun violence takes courage,” she said. “The courage to do what’s right…. Democrats, republicans, everyone. We must never stop fighting. Fight, fight. Be bold, be courageous. The nation is counting on you.” ​