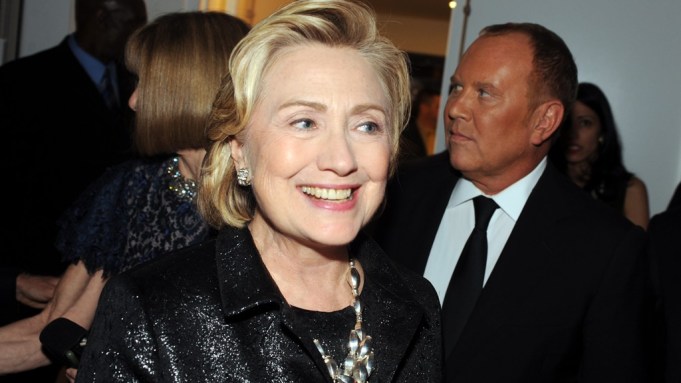 Though the federal government’s 16-day shutdown officially ended Thursday, Hillary Rodham Clinton shared news with a few hundred do-gooders on Wednesday night that the end was near. “The Senate did pass a deal tonight,” the former Secretary of State told the room at the God’s Love We Deliver Golden Heart Awards held at Spring Studios in lower Manhattan, where she was being honored. “So hopefully we can put this behind us. With the headlines and the despair that some feel watching the news, my advice is don’t watch.”

Clinton was among the legions of bold-faced names joining Michael Kors for the evening to support the designer’s champion cause, which provides meals to homebound New Yorkers, ultimately raising more than $3 million on the night. Earlier in the evening, a swarm of pretty, leggy things turned up in Kors’ wares for the occasion. Julianna Margulies, perhaps taking a sartorial cue from Clinton, went with a pantsuit of sorts: a white tuxedo jacket and trousers. Anja Rubik ’fessed up to a sartorial sin. “I’m cheating,” she said ruefully of her shimmering blush-colored Jason Wu slipdress. “Michael sent me this amazing dress but it didn’t quite fit so I had this as a back-up plan.”

Hillary Swank chose a scarlet lace body-skimmer from the Kors pre-fall collection. “I love Michael because he’s real. He’s genuine. What you see is what you get and that is so, so rare,” she said during cocktails before being yanked away by a handler. Jennifer Hudson, one of the last to arrive, echoed the sentiment. “Michael just has this big personality, just like me,” she said.

“Michael is just absolutely divine. I’m madly in love with him,” offered Bette Midler. “He can dress any woman and not just the tall ones that weigh 90 pounds.”

Miroslava Duma looked on as Midler posed with male fans for a slew of iPhone shots.

“I just love her,” the diminutive blogger-fascination stammered. “You know ‘Big Business’? When I was a child in Russia we only had one videotape in my family’s house and it was that. I’ve seen it like billions of times. I just love her…”

When it came time for dinner, guests were summoned to a sixth-floor dining room. Olivia Munn, Margulies, Swank and Midler took their seats at the single long table at the room’s center. One chair was conspicuously empty. A cadre of brawny Secret Service men began slipping in and stalking the premises. Soon, a pair shepherded Clinton through the room and to her seat. The room erupted in applause. After a round of speeches, Kors took to the dais to introduce Clinton. “She is probably the only person who travels more for work than I do,” he said, then going on to reflect on the evolution of Clinton’s look over the years. “I mean, let’s be honest, we’ve all seen her strong commitment to pantsuits over the years, but we’ve also seen her definitely have some fun with her hair.”

Over dinner, chatter generally oscillated between two Hillary-related topics: predictions for when the Senate would strike a deal and what the former Secretary of State could possibly be discussing with tablemate Midler, who Clinton spent much of the evening leaning over her plate of filet to chat with. “Shoes,” one guest chirped. “What it’s like to rule the world,” said another. Clinton herself declined all requests for comment.