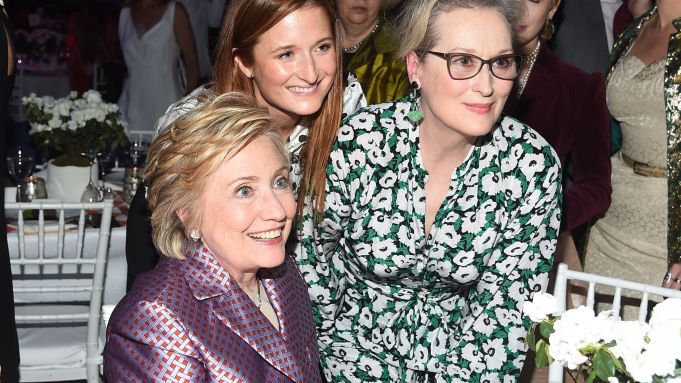 Planned Parenthood marked its 100th anniversary by throwing a gala Tuesday night at Pier 36 in New York. The event honored Shonda Rhimes and Hillary Clinton, who delivered an impassioned speech dotted with moments of levity.

As guests trickled in during cocktail hour, it became clear that the previous night’s festivities lingered in the minds of some. Christian Siriano thought the Met Gala was “great,” despite finding the theme somewhat difficult to follow.

“I thought it was a bit of a random mix,” he said. “It’s always hard with a theme that’s not a theme. It’s hard for other designers to design for another designer, but I think there were some people that were amazing. Rihanna was amazing. The people that I dressed were wonderful to work with.”

In contrast to Planned Parenthood’s outspokenness on women’s reproductive rights, most guests — including Tina Fey, Scarlett Johansson, Tavi Gevinson, Annette Bening, Zoe Buckman, Huma Abedin and Helena Christensen — declined to give interviews. Others preferred to wear their statements, donning Dior’s “We Should All Be Feminists” T-shirts and others with similar text. America Ferrera had an Edie Parker purse that read “PP100” custom made for the event.

“I’m looking forward to seeing Hillary Clinton be honored and also Shonda Rhimes, both incredible women I look up to,” Ferrara said. “I’m excited to be here celebrating the wonderful Planned Parenthood and how incredible of an ally they’ve been to women for 100 years. It feels good to be celebrating something good right now.”

Meryl Streep presented Shonda Rhimes with the Champion for Change award and Cecile Richards, president of Planned Parenthood, introduced Clinton, recipient of the Champion of the Century award. The former Secretary of State’s speech was fiery and pointed, but also used pop culture references to lighten the mood.

“Could you believe those photos of men around that conference table deciding how to strip away coverage for pregnancy and maternity care?” she said. “My favorite Internet meme about this were the dogs sitting around the table assessing feline care. I found that so on point.”

She joked about her “long walks in the woods” and brought up Hulu’s adaptation of  Margaret Atwood’s “The Handmaid’s Tale.”

“I am not suggesting this dystopian future is around the corner, but this show has brought up important conversations about women’s rights,” she said. “In ‘The Handmaid’s Tale,’ women’s rights are ultimately slowly stripped away. As one character says, ‘We didn’t look up from our phones until it was too late.’ It is not too late for us, but we have to encourage the millions of women and men who support Planned Parenthood’s mission to keep fighting. To paraphrase Margaret Atwood, we never let them run us down. Progress is never fully won. It has to be renewed generation after generation, and we stand on the shoulders of the women and men who came before us and march alongside the activists who are leading the way forward.”