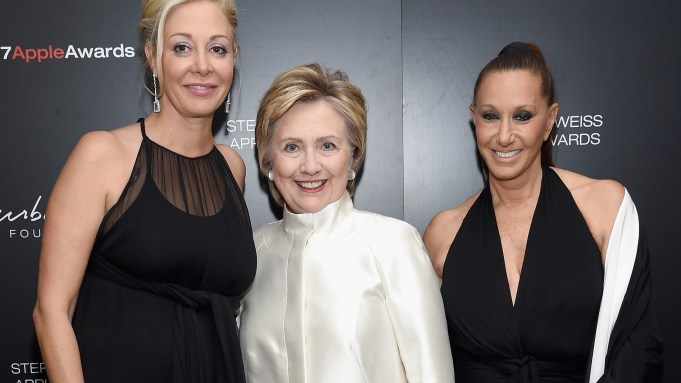 “Every time I come here I ask Donna why she doesn’t live here,” remarked Vera Wang of the rooftop garden oasis of Donna Karan’s New York Urban Zen Foundation headquarters. Friends and supporters of the philanthropic designer gathered Wednesday at her West Village retreat for the annual Stephan Weiss Apple Awards named after Karan’s late husband, who once used the airy space as his sculpture studio.

Guests including Wang, Diane von Furstenberg, Fern Mallis and Kenneth Cole mingled during the cocktail hour alongside strands of Swarovski crystals dripping like summertime icicles from a canopy of tree branches shading the early evening affair.

“I’m trying to be healthy so I added a splash of orange juice to my vodka,” added Wang with a laugh. The designer explained how Karan’s commitment to charitable endeavors increased in the wake of her husband’s death from lung cancer in 2001. “It was a very big love affair. Donna was such a creative force, but Stephan was a stabilizing influence. You need that yin and yang — I need one.”

“I live just behind here — you can see my house,” noted Helena Christensen, who nibbled a generous assortment of hors d’oeuvres before ducking out of the dinner to attend Stella McCartney’s resort presentation. “There are not a lot of places like this in New York and [Donna] created a complete universe up here of zen and beauty — I get the pleasure of looking over and watching everything bloom from my house. It’s really a luxury.”

Sipping a glass of Champagne, Christie Brinkley gushed about daughter Sailor Brinkley-Cook’s debut at the CFDA Fashion Awards on Monday. “People who saw her there said she was really comforting to the people who were nervous and was bringing people water and taking care of people. I’m so proud of her.”

Karan, who has made her life’s mission to care for the doctors and nurses who treat the terminally ill, raised more than $1 million with the evening, at which Hillary Clinton, Nadja Swarovski and the late Sandy Gallin were honored.

“[The foundation] has served nearly half a million women since they began this important work,” said Clinton in a speech to the crowd, which was spread out casually on sofas and banquettes in the candlelit studio-turned-dining room. “We need that more than ever.”

The former Secretary of State joked about the shoulderless frock Karan designed for her for a White House state dinner in the Nineties, which elicited laughter and applause from the rapt crowd. “She has always been ahead of her time from her appreciation for strong, empowered women to, yes, the cold-shouldered look, which singlehandedly she is bringing back. I think the dress she designed for me in 1993 had a lot to do with it. It just takes a while for people to catch up to Donna’s pioneering spirit.”

In a subtle criticism of the current political climate, Clinton ended her speech by emphasizing the importance of everyday gratitude. “I came tonight to say thank you and to urge all of us to figure out what more we can do because given what else is going on, we all need to keep going together.”

Clinton didn’t stay for dinner, which included a Mediterranean spread of lamb, salmon, roasted vegetables and pasta tossed with tomatoes and olives. “She had to go — she’s finishing her [next] book,” Karan revealed.

Despite the whirlwind of well-wishers, the woman of the hour took a moment between speeches to demonstrate her daily meditative practice. “Close your eyes and breathe,” she instructed a guest. “Just for a minute.”

Peacefully opening her eyes, Karan described how her late husband is an ever-present force in her daily life. “Stephan was the love of my life. He walked in and I absolutely fell in love with him right then and there. It was actually at my engagement party when I married [my first husband] Mark [Karan]. I was 18 and I fell in love with him.”

Karan explained that Weiss contracted lung cancer as a result of sculpting with Lucite and working with asbestos on Broadway stage sets. The artist is among the many loved ones Karan has lost over the years. “More people than I’d like to admit have died from cancer. My whole family, Anne Klein — I wouldn’t be who I am today, unfortunately, if she had not passed. My husband, my best friends and, just recently, Sandy Gallin and before that Ingrid Sischy. It never ends.”

Gallin, who died of non-Hodgkin’s lymphoma in April at age 76, was memorialized in a photo slideshow tribute that brought the chatty room to silence. Donning dark sunglasses, Karan made an emotional speech in honor of the late producer, whom she met through pal Barbra Streisand. “I always ad-lib,” she noted. “I’ve never read a speech in my life. I speak from the heart.”

Calvin Klein tucked himself quietly beside Sandy Brant throughout the lengthy evening. The designer noted how beautiful it was for Karan to open her private space to the event and noted his initial apprehension at opening his Southampton home to a garden party for God’s Love We Deliver this coming weekend. “I don’t normally do that, but it’s such a good cause it was hard to say no,” explained Klein, who is currently working on a book detailing 40 years of his illustrious career. “There will be jeans, underwear and a lot of naked.”

Diane von Furstenberg introduced Nadja Swarovski, who donated dozens of luminescent crystal candleholders for the affair, by noting, “I’m a little bit of a Jewish mother and I’ve had a lot of pleasure watching Nadja come from a sexy, beautiful young woman into an accomplished businesswoman.”

The Austrian heiress gave a stirring speech about her dedication to philanthropy framed by the idea of noblesse oblige. “At Swarovski we don’t think in quarters, but in generations, and I’m inspired by my children and what kind of world their generation will inhabit.”

Lydia Fenet of Christie’s led an auction that netted $300,000 for the foundation with lots including a trip to Haiti with Karan, a private tour of the Hermès museum in Paris complete with a custom 30cm Birkin bag and — the most sought-after experience — a three-night stay at Karan’s private home in Parrot Cay in Turks and Caicos.

“Hugh Jackman told me it’s the best skinny dipping in the world,” Fenet explained as the crowd’s imaginations ran wild. Apparently eager to relive the experience, Jackman’s wife Deborra-Lee Furness won the lot with a bid of $100,000.

After hours of eating and imbibing, the relaxed crowd filtered out of the serene space to a cab-filled city street corner as mediation guru Donna D’Cruz spun bass-thumping disco tracks from an elevated DJ booth. “We’re all walking around anxious about tomorrow and the world we’re leaving to our children,” Karan concluded. “Urban Zen was created to find the calm in the chaos.”