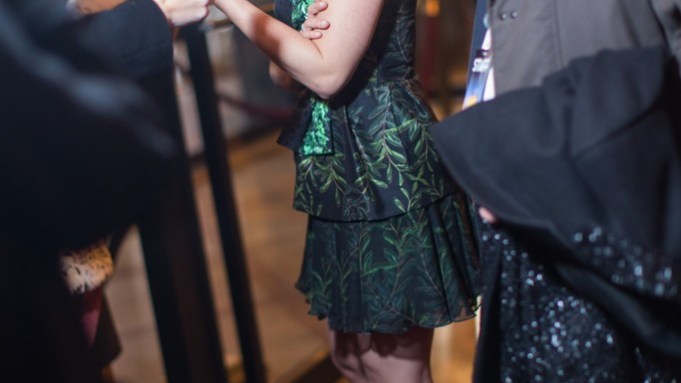 For a biopic about arguably cinema’s greatest master of suspense, there was not much mystery at the premiere of “Hitchcock” on Sunday night at the Ziegfeld Theatre in New York — save for maybe the puzzling presence of Jon Voight. The trenchcoat-clad actor, who had no apparent affiliation with the film, joined a bevy of the film’s stars on the red carpet. Apprehension-inducing maybe, but not exactly the stuff of “Alfred Hitchcock Presents.”

Johansson, bringing up the rear of the night’s arrivals at the Peggy Siegal Co.-hosted event, flirted her way down the press line in a sleek Rodarte cocktail dress, carefully maneuvering questions about her role in the upcoming “Captain America” sequel.

“You think I can tell you that?” the actress asked back.

Johansson was, however, game to answer the evening’s most prevalent question: What is your favorite Hitchcock film?

“‘Strangers on a Train,’” she offered before hustling into the theater. “I think as a child I responded to the carousel scene.”

An Oscar de la Renta-clad Biel stuck to the popular vote, the night’s film within a film, “Pyscho.”

Although the newlywed was tight-lipped on plans for her first Thanksgiving as a wife, she appeared ecstatic to see new husband Justin Timberlake once inside the theater. The fedora-wearing singer, already seated towards the middle of the audience, returned the sentiment, planting a kiss on his new bride’s forehead as the lights dimmed. Timberlake was M.I.A. at the film’s after party, held at the nearby 21 Club, where Biel schmoozed with industry folks over a glass of Champagne.