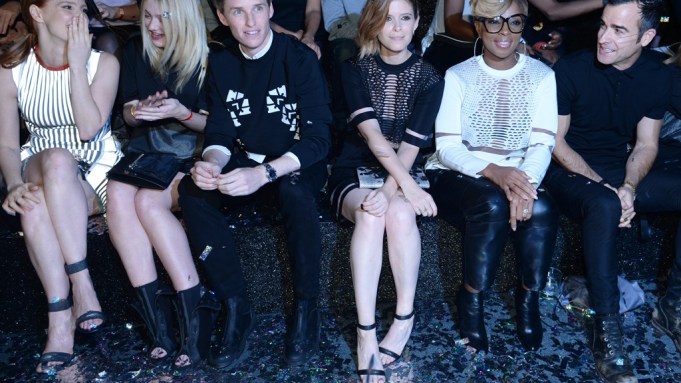 Over the past six weeks, the designer’s created his very own fashion Sports Center with a succession of sporty collections: spring 2015, inspired by iconic sneakers for his own brand; the Tour de France for Balenciaga; and now tough-chic gym wares for the masses with his capsule for H&M, the countdown for which began when he broke the news at Coachella in April.

The fast-fashion giant may have found its high-low soul mate in Wang, who slyly capitalized on the current cultural obsession with athletica via a collection of extremely cool workout clothes at attainable prices. “We didn’t want to do cheaper versions of the things that we do. We didn’t want to dilute our brand or cannibalize the things that we do,” said Wang before the show, a little breathy from just having wrapped a delayed rehearsal.

Ciick Here to See a Slideshow of Runway Images >>

“It’s a category that’s nondiscriminatory,” Wang said of his focus on activewear. “If you shop luxury or you shop mass, everyone is active. Everyone sweats.”

The designer produced true, technical performance wear — a point proven later by the troupe of parkour-ers that opened the show. “Working in fashion, you get away with saying, ‘This is gym-inspired,’ or ‘This is sport-inspired,’ but when you do things that actually have to perform in that space and have that functionality, there’s a lot of testing that goes into it,” he said.

“It was very important to find a venue with a heritage in sports. You know I love taking an audience to a new venue…” he said with a knowing smile.

“Where are we?” Lexi Boling said outside the Armory on the Hudson, smoke billowing out of her nose. She and a few other models — Nadja Bender, Tilda Lindstam, etc. — had dipped out post-rehearsal for a quick nicotine fix. Boling had also brought along a Corona 40 oz., sheathed in a brown paper bag, no less. “I thought the bag was appropriate, considering where we are,” she said between swigs.

The uniquely northern location, on 169th Street, was the icebreaker of the evening as arriving guests Kate Mara, Jessica Chastain, Mary J. Blige, Solange Knowles, Max Snow and Vanessa Traina, Erin Wasson, Natalie Joos, Dakota Fanning, Eddie Redmayne, Natasha Lyonne and Sofía Sanchez Barrenechea compared Uber quotes and travel times while grazing on truffle-tinged popcorn during the preshow cocktail hour. Justin Theroux, one of the first to arrive, gave his assessment of the collection, which he had seen up close earlier that day. “It’s very youthful, very New York; a real cool, street sensibility,” he said. (Just how many times has that very sentence been rattled off in reference to Wang?) “I may have to shop for a hoodie or two.”

Hanne Gaby Odiele was seen flitting around the room in a look from the collaboration, with very Wang-esqu e hair and makeup (read: sporty braids and barely any), prompting a few to speculate if she had snuck out from the backstage area for a beer.

“No, no. Today, I’m watching the show,” she said. When asked what exactly she was wearing under her oversize silver puffer (from the men’s portion of the collection), she said: “Just some nice sporty stuff, in case I feel like going on a run tonight.”

The show opened with a fashion film screened on the gymnasium’s Jumbotron featuring supermodels as impossibly chic and stealth superathletes. So intense and powerful are their godly physiques, they can break through concrete walls. As an additional prelude to the collection, a troupe of agile, hard-bodied parkour experts seized the set for a display of sexy street acrobatics. Then came the parade of models in bra tops, leggings, biker shorts, puffer parkas, football pads as corsets and wide-leg leather track pants and cargo boardshorts, many overtly branded with Alexander Wang logos. The men wore looks similar to the women’s, minus the sports bras and corsets, but still showing plenty of abs and pecs.

Team Wang’s colors were black, white and gray. They carried black leather basketballs, hockey sticks, boxing gloves and wore streamlined masks to protect their moneymakers, should anyone challenge them to a rough pickup game. Accessorized in vests and belts with outsize utility pockets, the look suggested some kind of apocalyptic militia for the insanely fit and beautiful. Or were they just the stylish regulars at Barry’s Bootcamp?

After Karlie Kloss did her signature slink, closing the show with a helmet tucked under her arm, Wang took his victory lap under a mist of silver confetti, cueing the diehards to race to the pop-up shop tucked behind the stage. Shoppers were strategic: “OK, you go to the far corner. That’s where the shoes are,” one girl directed. “I’ll get the [boxing] gloves.” An informal survey showed that logo gear and outerwear were about to go viral.

“Gimme some new s–t,” Missy Elliott hissed into her crystal-encrusted mic, as if to echo the sentiment, when she took the stage moments later. Models, many of whom walked in the show and still had the black gaffer tape on their hands, congregated toward the front of the stage. Binx Walton, Aline Weber, Suvi Koponen, Joan Smalls, Constance Jablonski and Kloss started to shimmy before Elliott stopped singing. “Wait, ladies, take them shoes off,” she commanded. “Did y’all come to be cute, or did y’all come to party?”