Fresh from the Pharrell set at Coachella, Wang arrived to greet his guests, including Florence Welch, Robert Pattinson, and Fergie. 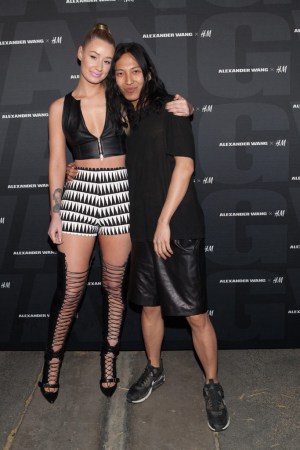 While high winds and sandstorms kicked up on the festival grounds Saturday evening during performances by Pharrell and Lorde, it was a surprise fashion collaboration announcement that really took the party circuit by storm. An Alexander Wang party confirmation sent out earlier in the day boasted an address adjacent to the H&M Loves Music bash (held at the Indio Performing Arts Center), and at 9 p.m. EST, the reason became clear. A video popped up on the designer’s Instagram account (the brand’s first and only post in two years), announcing Wang’s collaboration with the Swedish retailer. Upon arrival, it soon became clear that both entrances led to the same party, which featured an enviable music lineup — Jesse Marco, Major Lazer with Diplo, and surprise guest performer Iggy Azalea.

Fresh from the Pharrell set at Coachella, Wang arrived to greet his guests, including Florence Welch, Robert Pattinson, and Fergie. On the heels of her own Coachella performance, Lorde arrived with a posse of pals — and made a beeline for the grilled cheese stand, part of the food on offer which also included a prop vintage fridge packed with Oreos and Twinkies. More than 700 guests rocked out to the performances and feted the news of H&M x Alexander Wang with the designer, who took to the stage following Azalea to tell partygoers, “Go to the bar and get stocked up because it’s open, and I want to see you with both hands full!” And with that, he attempted to shower the audience with confetti from two strategically placed canons flanking the stage. “Oh my god,” he laughed, “Only one side is working!” he said of the snafu. But the celebratory effect was still felt by friends including Kate Bosworth, who showed in support of her long-time pal. “I am so thrilled for his success in different areas,” she said. “It couldn’t happen to a better person.”