Anna Dello Russo arrived in a white stretch limo to fete her collaboration with the retailer. 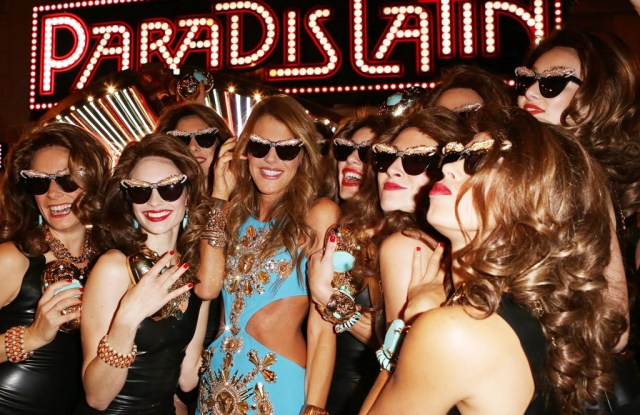 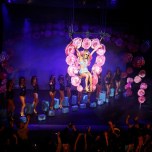 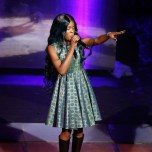 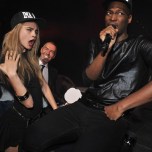 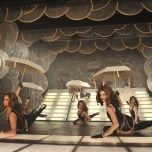 GOING FOR GOLD: “Nothing succeeds like excess.” Anna Dello Russo faithfully applied one of her fashion mantras — as spelled out in her techno song “Fashion Shower” — at the Paradise Ball on Thursday celebrating the launch of her accessories collection for Swedish high-street retailer H&M during Paris Fashion Week.

With the track booming from loudspeakers, the Italian fashion editor and style blog fixture — wearing a cutout turquoise and gold dress — arrived at the Paradis Latin cabaret on the French capital’s Left Bank in a white stretch limo. She was greeted by 12 look-alikes, dressed in skimpy latex outfits and sunglasses with gold crocodile-shaped frames, who joined her in lip-synching the song in the middle of the street.

Waiters squeezed through the crowd bearing trays with profiterole covered in icing in the collection’s signature shade of turquoise, and lollies emblazoned with her face. As the troupe of “mini Annas” took to the stage to perform dance routines, the star of the evening was lowered from the ceiling on a flower-covered throne.

“Tonight, after 25 years working like Cinderella, finally I have fun,” a breathless Dello Russo said, surrounded by well-wishers including Diesel chief Renzo Rosso and DSquared2 designers Dean and Dan Caten. She said the evening’s performances were inspired by Italian television entertainment shows. “I like varietà. I wish to be a soubrette,” she smiled.

While guests downed turquoise cocktails, the entertainment continued with live sets by Zebra Katz and Azealia Banks, as gold helium balloons shaped like the letters “A” and “H” rained down on the crowd.