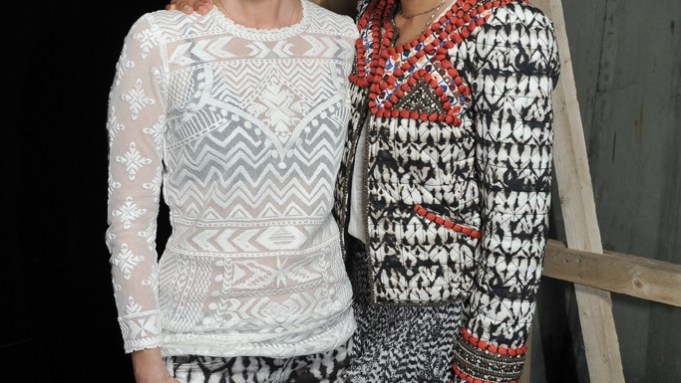 H&M built a sprawling street film set worthy of a film decor for the party Thursday night celebrating its collaboration with French designer Isabel Marant. Guests including Audrey Tautou, January Jones, Freida Pinto, Alek Wek and Alice Dellal streamed into the Tennis Club de Paris to discover a fantasy town complete with a roller-skating rink, a brasserie terrace and a corner grocery, where guests scooped up handfuls of colorful sweets — and mini bottles of Champagne.

“It’s an easygoing vision of Paris that reflects my personality — festive, joyful and generous,” said Marant.

Having spent the summer shooting “Vampire Academy” and “November Man,” the actress is prepping for “The Water Diviner,” Russell Crowe’s directorial debut. “I’m learning Turkish right now. I bought a Rosetta Stone,” she said. “It’s the first time I tried it — it’s amazing. I would recommend it to anybody.”

Jones, who tucked into a croque-monsieur and a beer at a cafe table, said she would start filming next week on the seventh and final season of “Mad Men.” “I’ll be really sad at the end, but I try not to think about that now. I’ll put it off until later, but it’s definitely bittersweet,” she mused.

Adding to the evening’s old-school flavor was a live performance by The Sugarhill Gang and hip-hop veteran Melle Mel.