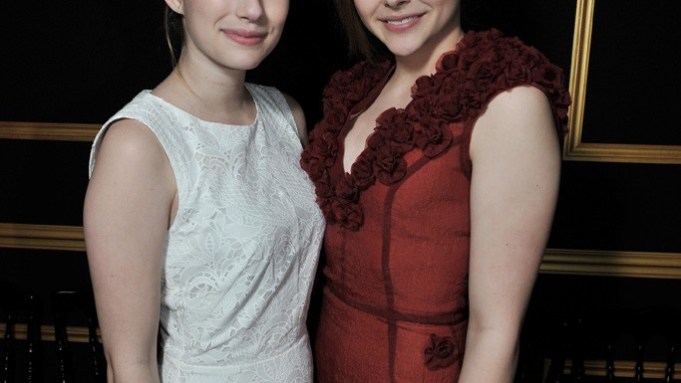 The hottest ticket at Paris Fashion Week on Wednesday night was not some up-and-coming designer, but fast-fashion stalwart H&M.

Guests jostled to enter the Musée Rodin, where the Swedish retailer had erected a mega-tent for a fashion show and party showcasing its fall collection, under the creative direction of head of design Ann-Sofie Johansson.

Guests including Ashley Olsen, Chloë Grace Moretz, Emma Roberts and Isabelle Huppert were scattered throughout the venue, which was elaborately decorated to look like a posh apartment. Some guests were seated near a bathtub in a marble-look bathroom, while others lounged in the master bedroom.

“I love it, because it’s made you feel like you’re at home,” said Melissa George, standing by a digital log fire in orange silk H&M pajamas. The Australian actress likes mixing designer clothes with high-street finds, though she admitted that when it comes to T-shirts, only the best will do. “The perfect T-shirt? Balmain. Expensive,” she said.

Moretz said she zipped over to Paris from London, where she’s doing reshoots for “Kick-Ass 2,” out June 28, and she’s also doing a cameo in the next Muppets movie. Asked if she shops at high-street stores, she nodded enthusiastically. “My mom doesn’t want me buying high-fashion things,” said the teenage actress.

Roberts was wearing a short cream lacy dress, but said she’s usually to be found in denim. “I like to wear jeans because they cover how pale my legs are,” she laughed. The actress will be seen next in “Empire State,” opposite Liam Hemsworth, and the summer comedy “We’re the Millers,” starring Jennifer Aniston.

Pixie Geldof quipped that she had getting dressed down to a fine art. “I just wear anything that’s on the floor and clean. I just pick it up,” she said.

“I play a farmer who goes to Paris,” she related, noting that agriculture turns out to be more stylish than she expected. “I wear some nice clothes.”

When the show finally began, almost an hour late, models emerged in a mix of tailored outerwear and sheer evening gowns. Highlights included a stiff navy wool coat cut away at the front like a morning coat, vintage-look embroidered chiffon dresses, a short velvet cape and fuzzy oversize knits.

“It’s a gang of girls that’s come together and having a good time, borrowing things from their boyfriends or from their grandmothers and just mixing them together in a really nice way,” Johansson said at a preview the day before.

H&M had not shown its main collection on the runway in eight years. The show at the Musée Rodin was live-streamed on the H&M Web site.

It is just the latest high-profile initiative by the brand, which dressed Helen Hunt at the Oscars and is launching its second Exclusive Conscious collection of red-carpet looks made from more sustainable materials in April.

Olsen, who sat next to H&M’s Margareta van den Bosch, said she was taken by the upbeat show, which had editors howling as the likes of Isabeli Fontana and Cara Delevingne strutted by. “I love it when models smile,” Olsen beamed, swept up in the crowd tugged to the dance floor by the pounding disco.