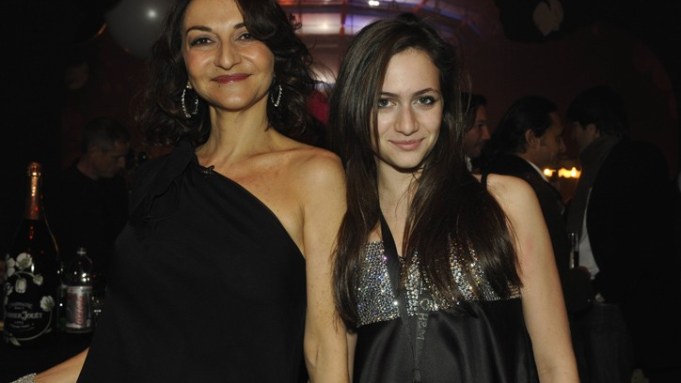 PARIS – The Paris launch party of Sonia Rykiel’s lingerie collection for H&M saw the Grand Palais, one of the city’s most famous landmarks, transformed into a Parisian-themed fun fair for around 2,000 guests, complete with a ferris wheel, a goose parade, candy floss stands and majorettes from Croatia.

Seated under a specially made Eiffel Tower that rose almost to the 11-story cupola, guests were given a preview of the Sonia Rykiel pour H&M lingerie collection, which debuts in around 1,500 H&M stores worldwide on Saturday, as well as a first glimpse of the knitwear collection for women and girls, due to launch in February.

The collections were showcased on gyrating models a top floats that emerged from a recreation of the Arc de Triomphe, painted in trademark Rykiel stripes.

“I am sure it’s going to be a wonderful success,” said Nathalie Rykiel, president and creative director of the fashion house.

Salome Burstein, Nathalie Rykiel’s daughter and Sonia’s granddaughter, was having a ball with her friends. “It’s like Sonia in Wonderland,” she enthused.

“This is so Paris,” chimed in Jean Paul Gaultier.

“It reminds me of my childhood,” said Lanvin men’s designer Lucas Ossendrijver. “The scariest ride I ever did was a loop-the-loop in Holland. I was turned every way.”

“So much for a crisis,” quipped Colombian designer Haider Ackermann as he surveyed the sprawling party dotted with champagne and oyster bars. He mulled a spin on the swing ride. “I love things that go round and round,” he joked.

Marina Hands, Eva Herzigova and Marie-Ange Casta were among guests clad in head-to-toe Rykiel. Casta, who has followed elder sister Laetitia into modeling, kept mum on whether she’s planning to copy her sibling’s switch to acting. “I’ll let you discover that,” she teased.

Photographer Ellen von Unwerth was very excited about the lingerie collection. “I’m sure we will be fighting over the bras Saturday,” she said.