A big fashion delegation from London, including Jonathan Saunders, Giles Deacon and Cara Delevingne came to town for the part. 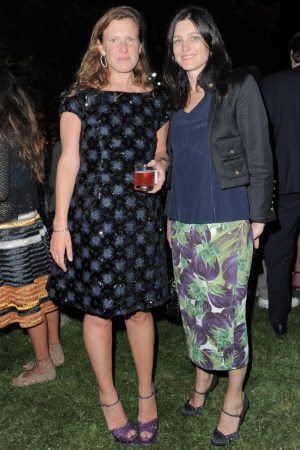 LONDON CALLING: When Katie Grand calls, London responds, or to be more specific, jumps on the first flight to Milan.

A big fashion delegation from the British capital, including Jonathan Saunders, Giles Deacon and Cara Delevingne, came to town for the party organized by Hogan to fete the footwear collection designed by the Love magazine editor-in-chief and famed stylist.

“I flew in specifically for Katie’s event,” said Deacon, who used to design for the Fay brand, which, like Hogan, is controlled by Italy’s Della Valle family. After the short break in Milan, Deacon is headed back to London to put the finishing touches to his pre-collection, which he will present in New York in January.

“For me this is a perfect holiday after London Fashion week,” said Lulu Kennedy, Love magazine editor-at-large and founder of London-based Fashion East, the nonprofit initiative supporting emerging designers.

Alessandra Facchinetti was also among those who enjoyed the eclectic, creative mood of London Fashion Week, where the designer presented her Uniqueness collection in a pop-up store on South Molton Street. “I’m really happy with the unexpected, incredible success of our initiative,” she said. “Our goal was to give customers the opportunity to immediately touch and see the collection.”