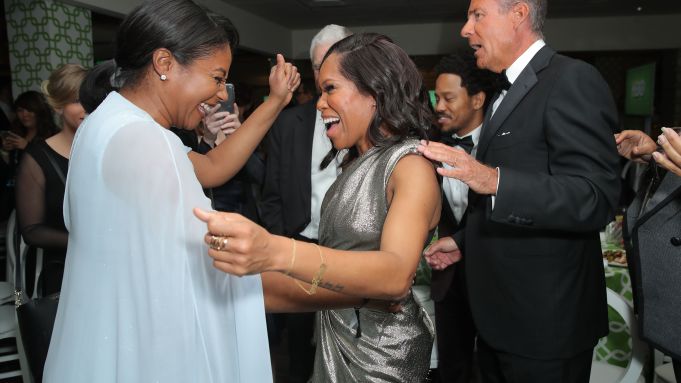 Well, not entirely amazing, she confessed. “I’m exhausted and this trophy weighs more than I do,” she laughed. “I’m not kidding you, because I haven’t eaten in like 10 days.” For a moment, she was eager to hand off her Globe award to a pal for some solo fashion shots, but then quickly mock-impatiently insisted, “Give me my damn award!” Clarkson said that when it came to what she was going to do next after claiming the honor, her goals were clear: “I’m going to eat now. And drink.”

HBO’s Globes night bash, once again set at the Beverly Hilton hotel’s Circa 55 poolside restaurant and lounge, just a quick flight of stairs down from the International Ballroom where the awards were handed out, is always one of the most popular party stops on the after-ceremony circuit — for both the network’s stars and other Hollywood A-listers. And despite a steady smattering of rainy sprinkles throughout the night, the stars weren’t going to let anything dampen their enthusiasm — especially when it came to kicking up their heels on the dance floor erected over the hotel’s famed pool.

The bash was one of many stops for Globe winner Patricia Arquette, a winner for Showtime’s “Escape at Dannemora,” who blew off any inter-network rivalry to show off her trophy to guests like Los Angeles philanthropist Barbara Davis. Tiffany Haddish swept through the party in a light blue, gauzy Michael Kors Collection gown, giving a hug to “Curb Your Enthusiasm” actor J.B. Smoove, making funny faces for photos with “Saturday Night Live” comedian Pete Davidson and cuddling up next to newly minted Globe winner Regina King (“If Beale Street Could Talk”), who was glowing in pink Alberta Ferretti. “Green Book’s” Globe-toting Mahershala Ali, about to headline HBO’s new season of “True Detective,” strolled the party with his trophy in one arm and his bride Amatus Sami-Karim on the other.

Emma Stone, donning a custom embroidered Louis Vuitton gown, enjoyed a nice respite from the glitzy chaos that characterizes a long day at the Globes, settling into a table while her beefy bodyguards kept selfie-seekers at bay — only “Succession” star Kieran Culkin, suited in Dior, was able to navigate his way in to join her. Meanwhile, Clarkson accommodated just about any photo-op she was asked to step into, while her “Sharp Objects” costars Amy Adams and Elizabeth Perkins noshed at a table with Adams’ husband Darren Le Gallo. Far less stationary was their series’ director Jean-Marc Vallée, who burned up the dance floor showing off his moves to Panic! at the Disco’s “High Hopes.”

Just when it seemed like Debra Messing was going to be the one to close down the party as she held court with a steady array of pals inside the restaurant as the clock pushed midnight, things were getting even more interesting a couple tables over where “Crazy Rich Asians” actress Constance Wu and “Westworld” actor Leonardo Nam’s playful interaction increasingly bordered on canoodling.

Fashion With a Mix of Messages for Golden Globes 2019