Hollywood Pre-Parties for the Emmys

By Jenny Sundel and Fatima Rizwan on September 23, 2012
View Slideshow 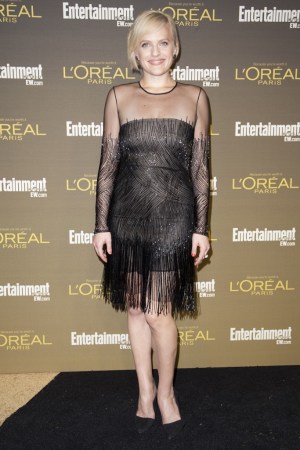 The official nominees’ reception for the 64th Primetime Emmy Awards gave a school picture day air to the Pacific Design Center’s Spectra restaurant in West Hollywood on Friday. One by one, nominees including Kevin Costner, Jon Cryer, Bryan Cranston and Julia Louis-Dreyfus walked across a small outdoor stage to collect certificates from Lily Tomlin. Connie Britton almost forgot to pose for the required photo.

“I was completely thrown and starstruck, so all I could do is say, ‘Oh my God, there’s Lily Tomlin,’” an embarrassed Britton said later.

Amy Poehler drew laughs when she grabbed the microphone and pretended to give an acceptance speech. “Thank you so much!” she teased.

“I wanted to keep it under control, but that was a really good DJ,” she said.

Catching up inside the party were Aziz Ansari, Rob Huebel, Paul Scheer and Aubrey Plaza. Kiernan Shipka spoke about the success of “Mad Men” and her own vintage style.

“I try to take pieces from the era and incorporate them into my style, I’m totally into vintage,” the 12-year-old Shipka said. “‘Mad Men’ is crazy! Going to these types of things are surreal but really fun. I love it.”

On Saturday, the Brits in Hollywood, including Michelle Dockery, Joanne Froggatt and Emilia Clarke, had a class reunion of sorts in the form of BAFTA Los Angeles’ annual pre-Emmy tea party at The London West Hollywood hotel. The blazing heat certainly wasn’t typical of England, but the food — an assortment of scones, crumpets and finger sandwiches — definitely was.

“It’s so nice to be amongst all the Brits abroad, it’s lovely — it’s like a second home,” said Clarke.

A few Yanks joined in, including Ginnifer Goodwin, Aaron Paul, Ashley Madekwe and Anna Gunn. Sipping cocktails poolside, costars Paul and Gunn discussed the last half of the final season of “Breaking Bad,” set for release next year.

“I start to get sentimental and sad,” Gunn said. “But as Bryan [Cranston] said, ‘We just need to savor every moment.’”