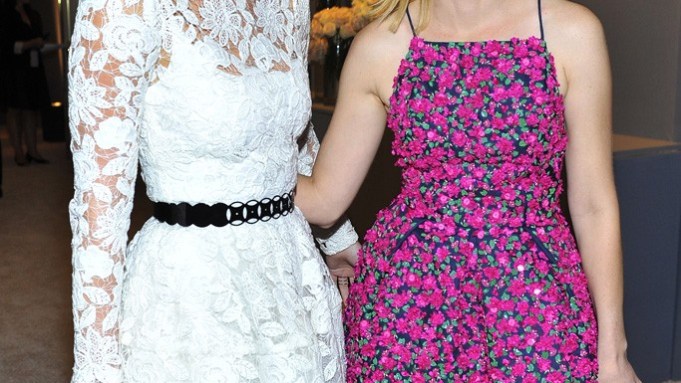 There was such a palpable power rush at the Four Seasons Beverly Hills Monday night that even Francisco Costa, not exactly unused to a starry crowd, was taken back.

“It surprises me there is still enough beautiful amazing talent to honor,” he said. “It never ceases to impress, you know what I mean? Annette Bening and Warren Beatty just walked by. I mean, wow. There’s still the wow factor.”

It was easy to be overwhelmed because everywhere the designer looked, there was a movie star. Elle and editor in chief Robbie Myers were again saluting, for the 21st year, the “Women in Hollywood” and each of the honorees — Elizabeth Banks, Tina Fey, Jennifer Garner, Jessica Lange, Brie Larson and Gugu Mbatha-Raw — had invited along a celebrity pal to present them with their crystal award and magazine cover. That meant Kerry Washington, Jennifer Lawrence, Amy Poehler, Steve Carell, Shirley MacLaine, Bill Hader, and Renée Zellweger were also in orbit. Calvin Klein Collection and its women’s scent Reveal were sponsors along with David Yurman.

Despite the usual gushing that happens at these do-gooder events, host Joel McHale set the tone of the evening early on by declaring he came to “knock these women down a peg. A Hollywood without Tina Fey is like a Washington with Sarah Palin,” he said. After a scripted yet touching introduction from Carell, Garner took the stage with a pizza in hand and told a seriously not PG-13 story about their love scene in the new family movie “Alexander and the Terrible, Horrible, No Good, Very Bad Day.”

“I wasn’t eating pizza when I was in lingerie,” she concluded finally, referring to her early sexpot roles in shows like “Alias.” “See, it’s better to play moms.” Lawrence made a very late arrival to present Banks with her award while Washington was still in the middle of a lengthy tribute to Bening. For a second, the crowd didn’t know where to look — Olivia Pope herself or the Oscar winner? The “Scandal” actress somehow held her ground. J. Law delivered one of her signature goofy speeches introducing her costar “in the unfortunate box-office flop called ‘The Hunger Games.’” She referred to Banks, who plays a character named Effie Trinket in the blockbuster franchise, as “the Kevin Bacon of our generation.”

Poehler and Fey wrote their remarks on the fly, on notepaper while at their dinner table. “You should see this ‘SNL moms’ text chain between me, Amy and Rachel Dratch,” Fey said. “When I turn 50, I’m gonna publish it.”

Appropriately, MacLaine, Beatty’s sister by the way, was chosen to present the L’Oréal Paris Legend Award, which went to Lange. Though their careers overlap somewhat, their only screen credits together until recently were cameos at televised awards shows. They just completed a movie called “Wild Oats” that stars another Hollywood broad, Demi Moore.

“I made the movie with Jessica because I wanted to fly to the Cayman Islands, which are supposedly the last remnants of the lost city of Atlantis,” said the ever-spiritual MacLaine. Lange was a little more earnest in her response: “I made the movie because I wanted to work with Shirley MacLaine. I’m at what is probably the end of my career and I still love the opportunity to pretend and to live in my imagination.”