Jeffrey Kalinsky’s annual fundraising event will be held at the Phipps Plaza mall on Aug. 31. 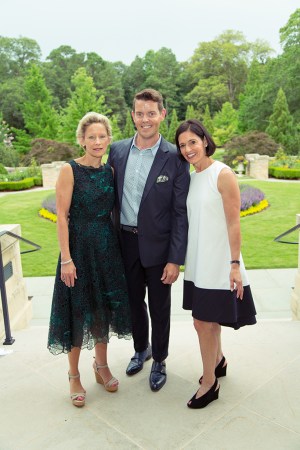 ATLANTA — With Jeffrey Atlanta celebrating its 25th anniversary this year, the host committee of Jeffrey Fashion Cares wanted to do something special as Jeffrey Kalinsky’s annual fundraising event approaches in August. That turned out to be a private party at the home of Arthur Blank, co-founder of Home Depot, owner of the Atlanta Falcons, and philanthropist.

Blank, smartly dressed in white slacks, a white and blue striped shirt, blue jacket and, of course, an Atlanta Falcons pin, said he agreed to host the event to support Jeffrey Fashion Cares, which has contributed nearly $13 million to the Susan B. Komen for the Cure-Greater Atlanta and the Atlanta AIDS Fund, plus he’s a good friend of Jeffrey Fashion Cares chair Lila Hertz and her husband, Doug.

The other event chairs are Louise Sams and Jeffrey McQuithy, who mingled with the mob of guests enjoying Blank’s magnificent home and gardens on a rain-threatening Wednesday evening. Guests included Dwayne Herbert, general manager of Phipps Plaza, where the Jeffrey Atlanta store is located; Michele Crosland, who supports Meals on Wheels Atlanta; Dr. April Speed, who is on the Komen Atlanta Board of Directors, and Amy Agami, who is on the Children’s Healthcare of Atlanta Young Leadership Council. Up-and-coming singer Hallie Jackson performed songs while a pianist accompanied her on a baby grand.

Unfortunately, Kalinsky himself wasn’t able to attend because of a European buying trip.

Hertz, who asked Blank to open his house for the event, said she thought it would be good to have the host party at a person’s home this year. “And this is one of the most beautiful homes I know,” she said.

She added that Jeffrey Fashion Cares moves this year to Phipps Plaza, where it will be held in the Monarch Court section of the mall on Aug. 31, not long after the completion of an interior renovation at Phipps. Plus, she tantalizingly said, “Jeffrey has tasked us with coming up with a décor that will put us in a different place [than in the mall].”