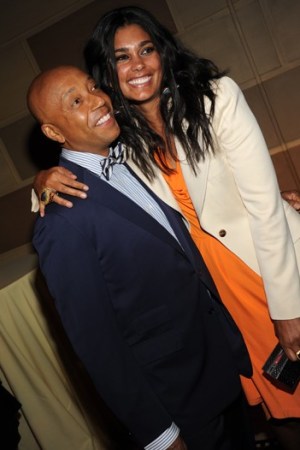 When Sir Ken Robinson took the stage at Gotham Hall on Wednesday night to accept an award from The Gordon Parks Foundation at its annual dinner, he was unable to resist addressing the elephant in the room, or more specifically, the three mute blue men in the room. “My fellow recipients tonight are impossibly iconic,” Robinson grinned, gazing over the shiny, indigo-shellacqued skull-caps of his friends on stage, “I love these blue men,” Robinson continued. “But I’m speaking of Arianna Huffington. Karl Lagerfeld. Spike Lee. Stephanie Winston Wolkoff… What do we all have in common? That almost sounds like the start of a joke, doesn’t it?”

The Blue Man Group, who had been brought out to introduce Robinson (accompanied by a short video presentation, as the three do not speak) drummed a series of white-painted pipes in agreement before darting off into the audience, blinking obliquely. “We have Gordon Parks in common.” Robinson explained. “He represents the power of humanity, the power of imagination.”

The dinner was held under the somewhat vague aegis of “celebrating creativity,” which explained the diverse list of honorees and of guests, who included professional race car driver Jeff Gordon to those more used to being professionally driven, such as Amy Fine Collins, Peter Kunhardt Jr., Dyllan McGee, Lily Rabe, Maggie Betts and Alina Cho. Iman was the mistress of ceremonies, and was equally pleased to be a part of the ceremony. “I’ve known Gordon [Parks] since 1975,” Iman explained of the foundation’s namesake, who died in 2006. “He took me under his wing. He took me to museums, galleries, he taught me about photography. He wanted to show me the city, that there was more to it than nightclubs and fashion shows. I’ll always be grateful for that.” Rachel Roy and Russell Simmons arrived together, a little late, scooting towards their table to surreptitiously sit down without interrupting the speeches.

Lee, clad in a navy blazer, breast pocket embroidered with the New York Yankees insignia, spoke very briefly about Parks’ effect on his life, and enthused over his personal collection of the photographers’ work, confiding that “the Lees will have those for a very, very long time.” Huffington accepted both her award and copious praise from AOL chief executive Tim Armstrong, the two ribbing and teasing each other at the microphone. Donna Karan was seated at Huffington’s table, along with Dr. Peggy Drexler, both of whom applauded enthusiastically for the media powerhouse. Karan later wrapped Huffington in a congratulatory embrace. Lagerfeld arrived right as most of the room had been seated, flanked by his expected posse of extremely attractive cohorts clad in Chanel: Freja Beha and Anna Mouglalis among them. “I’m so proud, and so very thankful,” Lagerfeld said of his honor, “but I’m never done. I knew Gordon’s photos before I knew Gordon, and they left such an impression on me as a student in München. That’s what you want, as an artist. That’s what I hope for.”

After the awards were distributed, and the live auction concluded (not including the silent auction, the event had already raised over $100,000 for the foundation) Rufus Wainwright took to the stage, gently tapping at the piano’s keys and speaking into the microphone in a bluesy club-fashion, “I just want everyone to know,” he breathed, “I’m very happy because the Wainwrights bought the Warhol tonight.” The giggling chaunteur was speaking of a Polaroid of Grace Jones from 1984 that he had purchased for $12,000. “I’ve got my first Warhol,” Wainwright trilled, “Look out!”