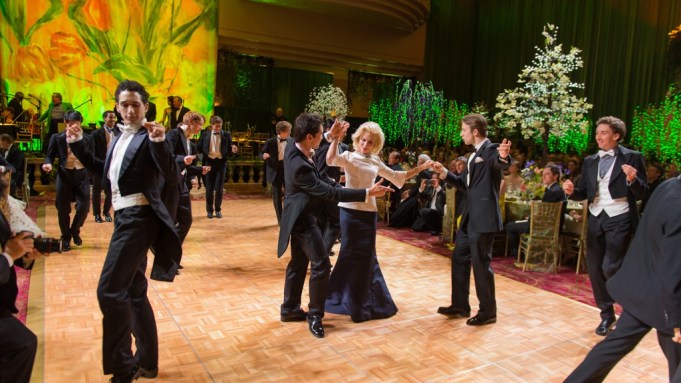 Dancing is de Rigueur at the Houston Ballet Ball, but guests at the annual gala got more than expected when honoree Lynn Wyatt took to the floor with 19 of the troupe’s dancers for a choreographed routine to Beyoncé’s “Halo” on Saturday. The flash-mob-style dance and the attendance of designer and Wyatt’s close friend Carolina Herrera were highlights of the “Rite of Spring”-themed party. Ballet artistic director Stanton Welch originally planned to surprise the Houston socialite, but decided better of it.

“I don’t like surprises and Stanton knows that, so he told me about it. It was a shock and I am so flattered he would choreograph a dance just for me,” Wyatt said.

In between the appetizer and entrée, tuxedo-clad men popped up from tables around the grand lobby of the Wortham Theater Center Grand Foyer and headed to the dance floor, where Wyatt was waiting with Welch.

She began dancing with Welch, bringing the room to applause when he dipped her with great flourish. The handsome ballet corps cut in, spinning her around the dance floor until delivering Wyatt to the stage, where she clapped along to the music. After the dance and applause, Wyatt joked that she would meet the dancers back in her dressing room.

Wyatt wore a Herrera fitted navy blue skirt with a train, a white jacket that buttoned in the back and her trademark emeralds.

“We have been friends for 30 years,” Wyatt said of Herrera. “She is the most loyal, the most wonderful friend.”

Herrera was equally effusive about her friend.

“We share laughter, fun and friendship, and I love her drawn-out Southern manner and the way she says, ‘Hellooooo,’” the designer said.