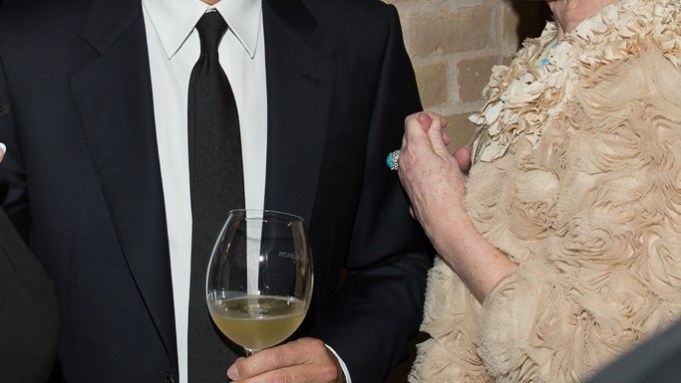 George Clooney brought his megastar power to the Brilliant Lecture Series in Houston Thursday, charming the standing-room-only crowd at the Wortham Theater and later the 170 guests at a seated dinner hosted by Becca Cason Thrash. Scott Brogan, founder of the Brilliant Lecture Series, has featured Sidney Poitier, Maya Angelou and Dame Julie Andrews over the past seven years but said Clooney upped the ante.

“How do you top George Clooney? This started with a nice little phone call and a mutual friend, and when he suggested George, I had no reference point, because I hadn’t heard him do something like this,” Brogan said. Lecture tickets started at $25, while the black-tie fund-raiser dinner that followed was more exclusive at $2,500 a seat.

The moment Clooney set foot through the Thrashes’ Memorial estate, he began posing for pictures and shaking hands with the ease of a presidential candidate — or a fund-raiser for one. A self-described “old Democrat,” Clooney is holding a fund-raiser for President Obama on Thursday that is expected to raise at least $12 million. It has been a year since Clooney’s last visit to the predominantly red state of Texas, and he tread carefully when discussing the election. “I have my own wish the way I want it to end, but really I want the election to end peacefully, safely. Without a bloodbath,” he said.

Although Darfur and Clooney are often mentioned in the same breath, he stressed the need for action in all of Sudan is needed now to stop Omar Al-Bashir, an alleged war criminal, from continuing to destroy the country and its people. “It’s as simple as writing your congressman, know who your elected leaders are. It’s about getting involved, and I don’t mean militarily. Sanctions work,” he said.

Dressed in Giorgio Armani and often with vodka on the rocks in hand, Clooney wasn’t all work. When a tuxedo-clad party guest accidentally fell into the pool, the actor popped up from his chair and yelled, “Everybody in!”

Thrash, who wore Givenchy, designed the apple-green and white tablescapes that lined the indoor pool, and juggled the ever-expanding guest list, which included Lynn Wyatt, who conducted the question-and-answer portion of the lecture earlier in the evening; Diane Lokey Farb in Chanel, and Naeem Khan and his wife Ranjana. As the evening drew to a close, Thrash asked the “devastatingly attractive George Clooney” to say a few words. After mock hesitation, he accepted the microphone and said, “It’s been a wild seven hours and an adventure.”