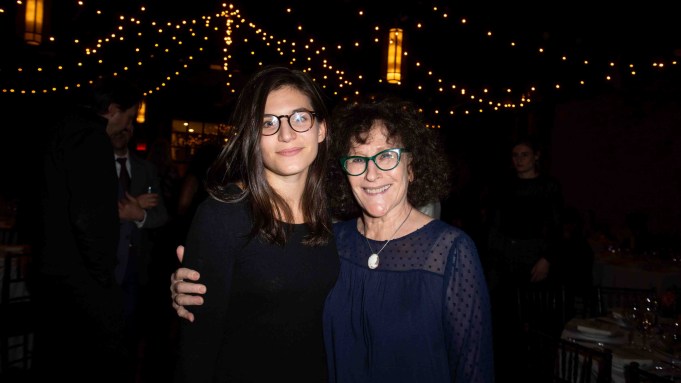 The literary magazine N+1’s benefit N Plus Ultra wasn’t held Thursday night in a ritzy, uptown space with chandeliers and floor-to-ceiling windows. There were no gentlemen in white coats handing out flutes of Champagne from the surface of silver trays. Instead, a range of New York’s literature set, including Elif Batuman, Emily Gould, Lucas Zwirner and Lynne Tillman gathered for an understated evening at the end of a quiet street facing the East River in Brooklyn’s DUMBO neighborhood.

The party, which aimed to raise funds for the independent mag and award writer A.S. Hamrah with the N+1 writers’ fellowship, was quite unlike the usual fashion rager. Devoid of chatty celebrities, the room was filled with bookish folks who just wanted to hang out with their friends, talk about what they were reading, eat some focaccia and drink some white wine.

Hamrah reluctantly posed for photos and did a quick interview; but not until urging that questions be asked through his agent instead. In his acceptance speech, he explained that in high school, he’d won an award precisely on the day he’d chosen to wear an “embarrassing” Adam and the Ants T-shirt. The principal of his school called him into his office and invited a photographer from a local paper to take his picture.

“It was on that day that I realized I disliked the glare of media scrutiny,” he said. “It’s therefore triggering to have to accept this award in front of many people and writers I know.”

Actor John Doman, known for his role on “The Wire,” seemed more comfortable with a microphone in his face. He noted his friend and neighbor, the novelist Eddie Joyce, had invited him to attend the evening, and that he has some pals in the literary community.

“I have a few. And I also have friends who are working on the staff,” he said, gesturing toward the kitchen. “Actors who are moonlighting here tonight as the bartender and as the guy running the [back of house].”

Editor of N+1 Dayna Tortorici chatted with Tillman, author of “What Would Lynne Tillman Do?” about their favorite publications to read — Book Forum and Triple Canopy among them.

“I have to admit that I watch television, particularly late at night,” Tillman added. “The last two hours of my existence on that day, I dedicate to either ‘Making a Murderer,’ or comedies.”

When it came to watching TV first thing in the morning, though, Tillman had this to say: “See, I can’t do that, because to me, that’s a sign of [my own] clinical depression.”

Radiant Children in Growth Mode, With a U.S. Tour on the Books