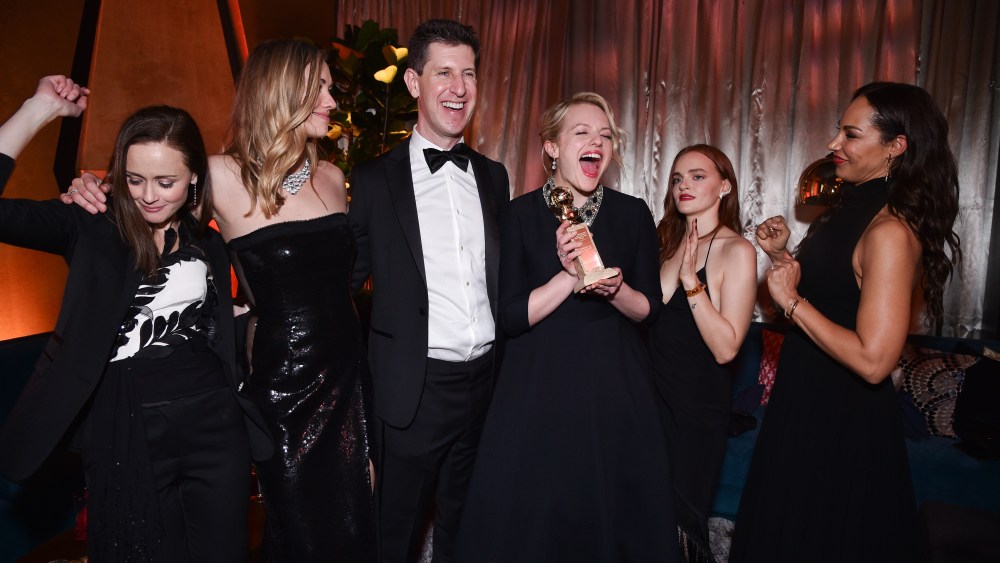 “Hurry up, we have some partying to do,” Frances McDormand told reporters as she and the cast of “Three Billboards Outside Ebbing, Missouri” got ready to head into Fox’s post-Golden Globes party. The actress, as well as castmate Sam Rockwell, had plenty to celebrate as they both picked up acting statuettes and the movie won the night’s big prize of Best Dramatic Film.

“We’ve already had some tequila,” added Rockwell, referring to the libations offered backstage at the “Winner’s Walk.” There, he crossed paths with Greta Gerwig and Saoirse Ronan, also celebrating their wins for “Lady Bird” as Best Comedy or Musical Film and Best Actress in a Comedy or Musical, respectively. “Woo! You go, girls,” shouted Rockwell.

The Fox party also drew “The Handmaid’s Tale” cast including star Elisabeth Moss, who took home top acting honors in a television drama, while the show picked up Best Drama Series. “Fargo” star Ewan McGregor also came toting his trophy, and he told people, “At the moment I’m just taking time off. I’m not waking up and going, ‘In four weeks I’ve got to go do….because that’s what my life’s been like because I’ve been lucky.”

Of the upcoming “American Crime Story: Versace,” in which he plays Andrew Cunanan, Jenkins said he prepared to play the serial killer “the same way you prepare for anything else. Those people are closer to you than you may think, as much as one hates to admit it or think about it. That’s where I come in. Any action a person has becomes something you relate to — fear, joy, all those things.”

To see pictures of the InStyle-Warner Bors. Golden Globes after party, click here.

To see pictures of the HBO Golden Globes after party, click here.

To see pictures of the Netflix Golden Globes after party, click here.

To see pictures of the Amazon Golden Globes after party, click here.