Hugo Boss Draws the Crowd That Parties Together

The brand's new Greene Street outpost was the first stop on many a New York partier’s Wednesday night.

By Alessandra Codinha on May 19, 2011
View Slideshow 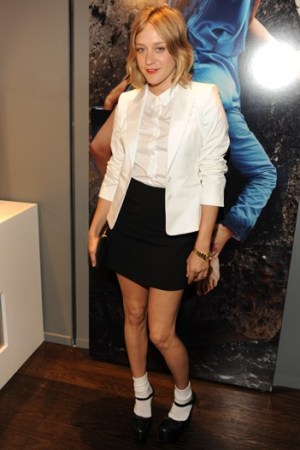 The soft mist of rain which lay over the city like a shroud on Wednesday night did not deter the cocktail-swilling set, who seemingly set their sights on a systematic takeover of the downtown area. First stop on the quest for free beverages and well-heeled company was the new Hugo Boss boutique on Greene Street, for a fête in honor of the Young Collectors Council of the Solomon R. Guggenheim Museum. Derek Lam, Lauren Remington Platt, Philip Bloch, Olivia Chantecaille and Emma Snowdon-Jones were all on hand to survey the new shopping space, which used varying shades of grey accented with the Hugo Boss signature color, red. There was a decidedly teeny-bopper emphasis on the guest list, with *Nsync’s Lance Bass in attendance, along with Ryan Kwanten of “True Blood,” and recently notorious Disney actor Alex Pettyfer.

Of Pettyfer one guest wondered aloud, “Doesn’t he have ‘Thank you!’ tattooed above his pelvic region?” to which the actor turned, grinned and responded in the affirmative, with a cocked eyebrow, and a “Sure do.”

Johannes Huebl squeezed into the store with girlfriend Olivia Palermo in tow, passing Zani Gugelmann and Lisa Marie Fernandez en route to the bar. Frederic Fekkai circulated with Shirin von Wuffin, pausing to greet Carlos Souza and Carlos Mota as well as Megan and Todd DiCiurcio. “This is so fun,” Miguelina Gambaccini enthused. “Look at everyone jammed together.” Paul Sevigny manned the DJ booth with sister Chloe gamely shimmying nearby, Oliver Jackson-Cohen chatted up Cory Bond and Bekah Jenkins while Hannah Bronfman and beau Asher Roth jockeyed for elbow room at one of the three bars. Of her Lolita-ish styling on her Hugo Boss threads, Chloe Sevigny joked, “Oh, who doesn’t like a little sock with a Mary Jane?” cutely turning one knee inward.

Further downtown, at the Hotel on Rivington on the Lower East Side, a few hundred party people rushed in from the rain to gather on leather banquettes at the opening of the new brasserie, Co-Op. A selection of modern American comestibles (truffled popcorn topped the tables in small iron buckets) circulated next to trays of sushi, provided by Co-op’s executive chef John Keller (Nobu, Le Bernadin) and sushi chef Steven ‘Neo’ Wong (Sushi of Gari, Megu, Sushi Hana). Betsey Johnson embraced revelers seemingly at random, pointing at a large portrait of her face on the wall from several years earlier. “Me,” Johnson laughed uproariously, “Let’s eat.” Tara Subkoff was the official hostess of the event, greeting guests with boyfriend Tom Hooper. Clearly a devoted sister-groupie, Chloe Sevigny arrived straight from the Hugo Boss party as Co-Op’s opener was her brother’s second gig of the evening. Michael Stipe, Deborah Harry and Jill and Bobby Zarin were all on hand to toast the new eatery, with the presence of Scott Lipps and the One model management team ensuring a bevy of very tall, comely females also wielding chopsticks: Byrdie Bell, Jessica White, Linda Vojtova and Noot Sear among them. Natasha Lyonne and Waris Ahluwalia arrived together, sitting at a long banquet-style wooden table with Johan Lindenberg. “There’s a photobooth downstairs by the bathroom,” one guest announced, creating a rush of interest in that direction by some of the more photo-familiar amongst the crowd.

After dinner, the party train lumbered to a stop at Apotheke in Chinatown, where fashion/music enthusiasts Kanon Vodka held an afterparty for Swedish superstar Lykke Li following her concert at Webster Hall. The welcome antidote to the evening’s preceding ragers, the intimate party was DJ’ed by Chrissie Miller, who Li had requested played only “oldies, and if hip-hop then by necessity from the 1980s or earlier.” Byrdie Bell, Becka Diamond, Scott Lipps and assorted models were all on hand to toast the singer’s latest American appearance. Swedish ‘Sockerbit’ sour gummy-candies littered the bar or rested near banquettes in jars. Kanon had created cocktails inspired by Lykke Li hits: “Get Some Tea” and “I’m good I’m gone fizz.” Li headed for the bar, laughing mid-stride, “Guess I know what I’ll be having…”