The brand marked men’s market week with a literal circus on Wednesday night. 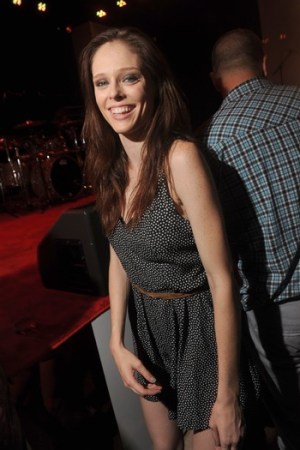 Men’s market week was a literal circus for Hugo Boss, which hosted its annual rooftop extravaganza atop its headquarters in the Starrett-Lehigh Building on Wednesday, filled with fire-eaters, stilt walkers, acrobats and a rollicking performance by ringmaster Cee Lo Green.

Taking in the sultry night amongst the carnival lights were Anthony Mackie, Coco Rocha, Fern Mallis, Peter Davis, Dani Stahl, Alex Lundqvist and Jeremy Kost — along with a throng of Hugo Boss retailers and partners.

“It’s a beautiful summer night in New York and what a fun opportunity to just let your hair down,” said Carson Kressley, who shimmied enthusiastically to DJ Cassidy on the dance floor. The blonde style maven recently wrapped filming his upcoming makeover show for the Oprah Winfrey Network, which had him crisscrossing a bevy of Western and Southern states in an Airstream trailer.

“I just made over everything in my path: homes, weddings, a 45-year-old virgin,” said Kressley — who also happens to be an accomplished equestrian and will compete in the World’s Championship Horse Show in Kentucky next month.

Also working on new television projects is Lance Bass, who has written several concepts that are in development, ranging from a music reality show to a scripted drama. On top of that, Bass has taken the chief executive officer role in a new e-commerce venture that launches next year, called Famousyardsale.com, where both celebrities and noncelebrities alike can raise money for charitable causes.

“As a not-so-skinny guy, it’s hard to find nice suits that give you the right fitted look. Hugo Boss hugs me in just the right places,” added the former boy band star of his affinity for the brand, in a moment of oversharing.