The two German companies have created a capsule collection to celebrate the partnership.

Since 2017, the German apparel brand has been Formula E’s official apparel partner, and last fall, it expanded its association by teaming with Porsche, which will join the series starting with the next season in December. The partnership includes outfitting the team and the creation of a Porsche x Boss capsule collection that debuted with a small selection for spring and will be expanded significantly for fall.

On Thursday night, Hugo Boss hosted #RaceAhead at Pier 17 in a space overlooking the Brooklyn Bridge. The location was chosen specifically as a nod to Formula E’s final races that will be held this weekend in Red Hook, Brooklyn.

Mark Langer, chief executive officer of Hugo Boss AG, served as host for the evening that drew some 500 guests who got a close-up look at the Porsche team uniforms, the fall capsule and the top-secret prototype of the Porsche car that will compete later this year. But don’t expect any Instagram posts of the sleek car: Everyone entering the curtained area was made to leave their phones on a table at the entrance.

With Porsche joining the Formula E series, many of the largest automotive brands — Audi, BMW, Mercedes, Jaguar and Nissan already have teams — have thrown their support behind the newest motorsport series. Now in its fifth season, Formula E was created by Alejandro Agag in 2011. 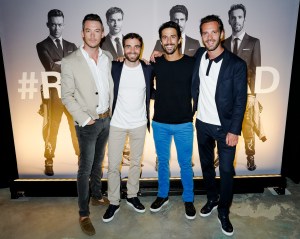 Langer said Agag and his “true start-up” was “laughed at in the beginning,” but with the big European automakers’ support, the series has now hit “an important milestone.” He hopes that one of the big American manufacturers, such as Ford or General Motors, will jump on board as well.

He said: “We’re not going to change the world with electric motorsports,” he said, “but we’re creating a platform.”

Langer said that throughout its history, Boss has been involved in car racing and had a long-standing partnership with McLaren and its Formula One team. “It’s very close to our hearts,” he said. “It’s where we see the brand.”

But in 2016, Langer said the company “started rethinking our business model,” he said. Technology became more important and sustainability moved to the forefront, and Boss shifted its focus from Formula One to Formula E. “We took a very deliberate step,” he said.

He said that while Boss got a little pushback from “diehard petrol heads” who don’t view electric car racing as a real sport, once they give it a shot, they change their minds. “It is a real race,” he said.

For Boss, being front and center at the races in New York, “which is a core market for us,” Langer said, was key. When it debuts later this year, the Porsche x Boss capsule of luxury leathers, knitwear and tailoring will be sold at Boss’ key stores around the world, including the Columbus Circle, World Trade Center and SoHo units in New York. 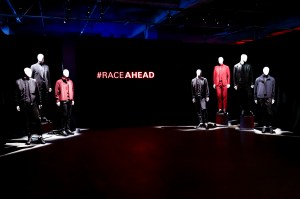 The face of the capsule is Mark Webber, an Australian-born driver who won nine Formula One Grand Prix championships and is now an author and broadcaster. He said that while Formula One is “still the pinnacle” of autoracing, Formula E is definitely finding its footing. 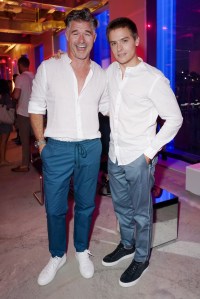 “It’s short, only 45 minutes a race, and really aimed at a younger audience,” he said. He believes that as this series continues to make strides, it will help boost the movement toward electric cars in general, which is further along in Europe than in the U.S. right now.

“Formula One is much faster and the budgets are bigger,” he said, “probably $300 million to Formula E’s $30 million to $40 million,” but with Porsche now getting involved, it makes “a huge statement. They’re serious about this,” he said of his long-time partner. He raced with Porsche after retiring from Formula One.

Although he never competed in an electric car, Webber said, “I’m still a racer at heart and like championing the people that are in it.”