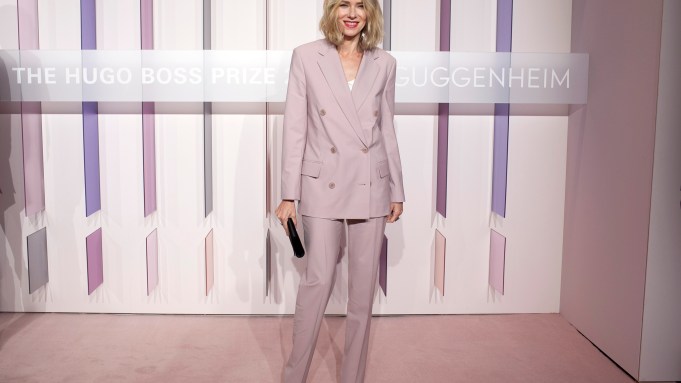 It was just before 8 p.m. on Thursday, and the winner of the 2018 Hugo Boss Prize was inside the Guggenheim Museum. The crowd just didn’t yet know which of the six artist finalists it was.

Before dinner, Naomi Watts was in her element filming for the fashion brand, while Alexander Skarsgard, Chloe Wise, Cindy Bruna, Michael Avedon and others mingled ahead of the dinnertime award announcement. The biennial art prize comes with not only an award of $100,000, but also a solo exhibition of their work at the museum.

“I just got a call one day and they said ‘You’re nominated,'” said video artist Wu Tsang before dinner. She has another prestigious award, the MacArthur “Genius” Grant, under her wing. “It feels like a big responsibility to keep doing the work that’s important to me.”

For Lagos and Berlin-based sound artist Emeka Ogboh, the honor was just being in the room (or rather, rotunda.) “There was a long list and a short list, so making the short list was a big deal.” As for what shows he’ll be seeing while in New York, he offered a relatable plan: “I’ll be seeing a lot of Netflix in my hotel room,” he said.

“I’d like to dedicate this award to Peggy Cooper Cafritz, my friend and mentor, who talked to me a lot about black women and art and power,” said Leigh, flanked onstage by Hugo Boss ceo Mark Langer and museum director Richard Armstrong. “She also talked to me about the importance of these kinds of awards and the responsibility that they engender and I accept.” The artist may have been feeling press-shy after winning the award, but she’ll have plenty to talk about this spring, when her work will be mounted at the museum.

“The prize honors excellence in contemporary art, which is just such a broad prompt,” said Guggenheim curator Susan Thompson, who will be working with Leigh on her exhibition and described the Hugo Boss prize as a “central pillar” of the museum’s contemporary programming. “There were a ton of things that really compelled the jury about her work,” she added. “The fact that she really has this long-standing dedication to undervalued and under-recognized histories, and takes this approach of meaningfully centering black female subjectivity in her work, and it was a really compelling aspect.”