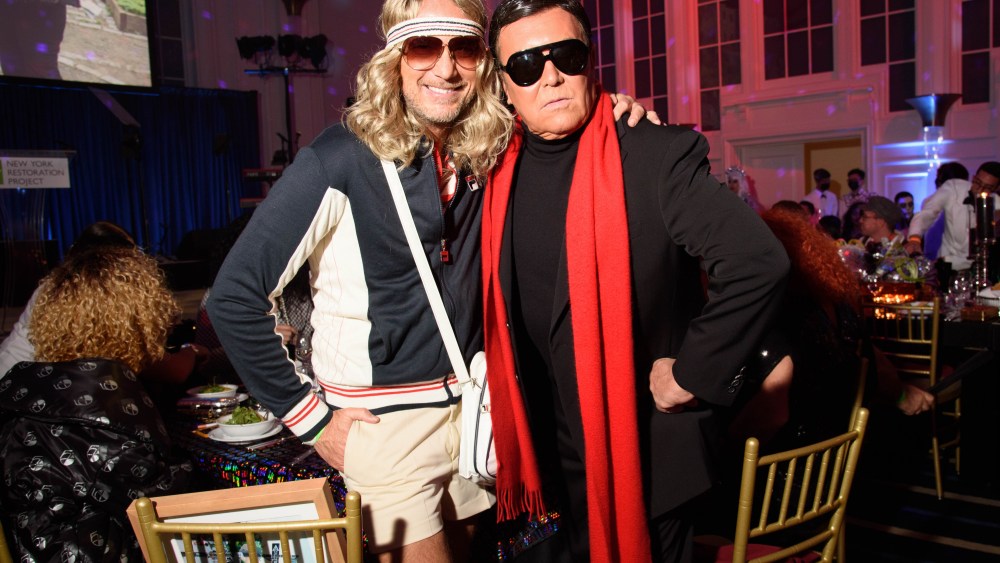 “Halston doesn’t go out without his entourage.”

In all of his years judging the Hulaween costume contest, New York Restoration Project board member Michael Kors had never handed out an award to his own group — but this year’s event on Friday night was a special case. “I am totally juiced by this theme, as you can see,” said Kors, wearing a long red scarf and black wig. The theme was Boogie Frights, and the NYRP board had all jumped onboard the Studio 54 train with Kors, who was dressed as his fellow designer Halston. He was accompanied by a Rollerena, Disco Sally, Elsa Peretti, Liza Minnelli, Diane Von Furstenberg and Björn Borg. Kors’ husband, Lance LePere, who was honored with the organization’s Wind Beneath My Wings Award, had opted to dress up as the Swedish tennis player. “Well, everyone wanted [Borg],” Kors riffed onstage at Cipriani South Street, as he revealed the group as runners up for best group costume.

The best individual costume winner was an Andy Warhol, and the runner-up was a Bianca Jagger on Her White Horse. Gang’s all there!

“I heard that it was a ‘70s theme,” said Gloria Gaynor on Friday night. The disco-era icon only had to dress as herself to stay on-theme. “So I went and got my vintage ‘70s outfit. I know it’s vintage ‘70s, because it’s mine, and I had it back in the ‘70s,” she added.

Later in the evening, the “I Will Survive” singer performed a live set for the enthused crowd after dinner. “I think it’s really important; the trees are life and breath for everybody,” said Gaynor of her support for NYRP, which creates and maintains greenspaces in the city. “Everytime I see people wasting bags and just using them unnecessarily, it gets on my nerves.”

NYRP founder Bette Midler’s daughter, Sophie Von Haselberg, had sustainability on her mind when selecting her costume for the evening.

“Initially I wanted to renew, reuse, recycle, so I thought that I would use something that I already had and then maybe zhuzh it up in some way,” said Von Haselberg, who later switched tacks and decided to rent her gold-striped bodysuit. “Then, you know, it won’t end up hanging in my closet for four years and I won’t wear it again. I just wanted to go in sequins and feel festive and feel disco-y. And then I really tried to crimp my hair, but I did it myself and I ended up in full-blown hair metal bands. So it went a little awry, but it’s fine.”

Von Haselberg has been a longtime Hulaween attendee — she was at the very first one, back in its Waldorf-Astoria days. “Rosie O’Donnell was the emcee and, I mean, they’ve gotten wilder in certain ways and less wild in other ways, but those first five or six were crazy and really fun and just very irreverent.”

Missing the event for the first time was Midler herself — but the actress had a good reason, and one still Halloween-related. “She’s about to start shooting ‘Hocus Pocus 2,’” said Von Haselberg.

“Michael Myers is one of the most iconic characters born in the ‘70s,” said Petras. “So I had to bust him out, a little knife nails,” she added, flashing her long nail extensions. “But I wanted to make him hot and trans. I’m Michaela Myers tonight.”

Marc Jacobs Finds His Fortune at Bergdorf Goodman After Dark