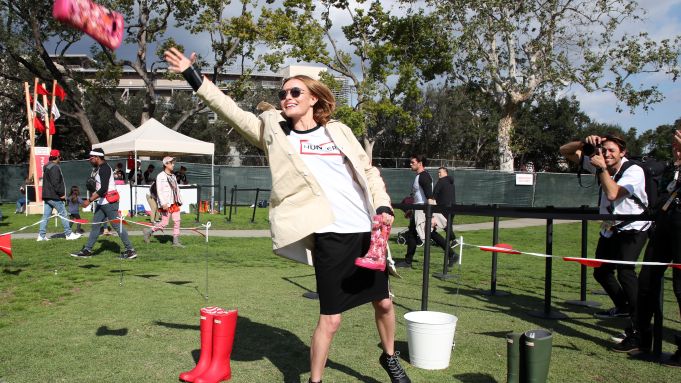 Target threw a family-friendly pre-Coachella concert at the Rose Bowl in Pasadena, Calif., to celebrate their new Hunter for Target collection.

“This is great because it feels like a controlled Coachella,” laughed Kendrick. “That way, I don’t actually have to deal with all of the Coachella-ness because I get a little anxiety around big crowds.”

Kendrick admitted she was “excited to stand in the back and vibe out because live music for me is usually just staring at the back of somebody’s head because I’m so petite. I think I’ll stand in the back and have my own dance party.” As for her head-to-toe Hunter for Target look, Kendrick said, “This coat makes me feel like I’m in ‘Paddington Bear/Blade Runner,’ which is great. That’s a movie collaboration that probably should happen.”

“I’m just so happy to not be in heels,” Bosworth said, looking down at her Hunter sneaker-clad feet. “I’m feeling very comfortable and relaxed. It’s been raining in L.A., so it’s a bit muddy. I’m in these cool Converse-esque Hunter shoes. It’s perfect for the elements.” Bosworth added, “It should be sunny all the time, but it’s been so rainy and cozy that I’m glad to be out and find some good food and listen to music. It feels like the warm-up to festival season. It’s like a preamble.” Even so, the “Tate” actress isn’t yet sure what her plans are for Coachella. “It’s always a last-minute decision,” she admitted.

“This is like a pre-Coachella kickoff,” Puth agreed, wearing an Our Legacy T-shirt with women’s Adidas pants, Chanel necklaces and a pair of blue Hunter for Target boots. “The weather’s getting nice and the rain has settled. But I’m still wearing the boots regardless.” He added, “I was going to wear my own. However, they gave me a free pair, so I might as well rock the blue ones even though they don’t really go with the outfit.”

Meanwhile, even Puth, who performed several of his own hit songs, couldn’t help but give into the afternoon’s laid-back vibe. “I love Britney Spears,” he said, breaking out into song midinterview. “I must confess I still believe…” Puth crooned, singing along to Spears’ hit “Baby One More Time.” “I love clothes and Britney Spears,” he said, as a Tom Jones song then proceeded to play. “They’re playing all my favorite jams right now.”

Steinfeld will be touring with Puth this summer. “I am just so excited to be going on the road,” she said. “I’m putting together new music as we speak. There’s nothing like going on the road with new music. It’s terrifying, but it’s exciting. I can’t wait. And I love Charlie and I think we’re going to have a lot of fun together.” As for her look, Steinfeld said, “I’m a huge bomber jacket girl, so this was my go-to piece. It’s my favorite piece from the collection.”

Haddish wore her Hunter for Target clothing with a pair of Louis Vuitton boots. The actress got a preview of the line in advance. “I have a duffel bag from them and I love it,” she said. “I take it everywhere I go. I’ve been traveling all over doing this comedy tour and everyone’s like, ‘That bag is cute. Where did you get it?’ I’m like, ‘Target.’ Tar-jay, baby!”

OneRepublic headlined the all-day affair, which was open to the public. “I was informed tonight is a competition,” said the band’s lead singer Ryan Tedder, who will be performing at Coachella with Norwegian DJ Kygo. “We’re going to take first place. We’re bringing heat we normally don’t bring or we only reserve for events like this. It’s 65 degrees in Pasadena. It’s paradise. What more is there? We could play the lamest music of all time and everyone would still have a good time. Fortunately, that’s not what we’re going to do. We’re going to bring the noise. Everybody is going to get fully woke by the end of this show.”

Dewan Tatum was the last to arrive. “Did I miss OneRepublic?” she asked. Upon learning that she hadn’t, she exhaled, “Oh, good. I love me some OneRepublic. It’s a Sunday fun-day here.” The actress said she couldn’t wait to shop the collection because she’s always looking for “anything we can all use as a family.” Tatum added, “We do a lot of outdoorsy events. We like to go into nature. We do a lot camping and a lot of hiking, so this will all be worn.”

The afternoon included interactive activities and installations like face painting, a glitter booth and a braid bar as well as a two-story Hunter for Target pop-up shop which allowed consumers to shop the limited-edition lifestyle collection before it launches at Target stores and online April 14. The collection retails for $4 to $80 and features over 300 items including boots, sandals, jackets, tops, bottoms, backpacks, duffels and small accessories for men, women, girls, boys and toddlers. It also offers home and outdoor goods like hammocks, sunshades and coolers, all of which are a first for Hunter.

“I know Hunter from being back in England,” said Cat Deeley. “It’s such an established British brand. It’s always synonymous with festivals and going out.”

“Every year, we try to take a fresh approach,” said Mark Tritton, Target executive vice president and chief merchandising officer, discussing the store’s strategy toward designer partnerships. “Our guest is active and they have a busy lifestyle. You want to have ease and comfort and energy and design at the heart of that. What Hunter does is create excitement and energy and fun — whether it’s a camping trip or it’s going out in the wet day. There’s really good synergy.”

Alasdhair Willis, creative director for Hunter, echoed the sentiment. “I was really excited to partner with Target because of what they stand for,” he said, “and how they go about their business in terms of their promotion of positivity, optimism, energy and fun. All of those emotional qualities are things that Hunter stands for and has always stood for.”

Willis, who has been working with Hunter since 2013, said the new collection is inspired by Kate Moss when she first wore the brand’s boots to Glastonbury in 2005. “We became this immediate festival must-have,” he said of the British brand, which has been around for 160 years. “That was the starting point,” he said, adding, “This is the first time we’ve worked on something from the Hunter point of view that’s across the whole family.”

Willis, who is married to Stella McCartney, said that his own family will soon be decked out in the collection. “The wife and kids haven’t seen too much of it yet because I’ve kept it pretty close,” he said, “but they have seen pieces and they’ve loved them all. I’m getting asked, ‘Can I get different colors of this and can I get multiples of that?’ They want everything basically. It’s fantastic. And having a family of four — with kids ranging from seven through to 13. I can use everything.”