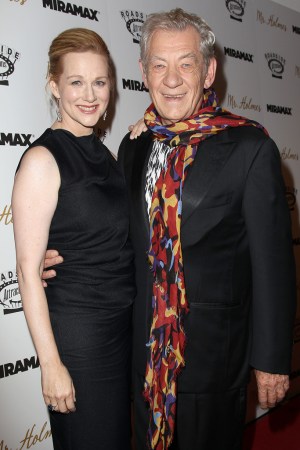 On Monday night, the New York social scene had many debuts to choose from, not least of which was the first night of the inaugural New York Fashion Week: Men’s. Sir Ian McKellen seemed to have picked up on the fashion vibe pulsing in the city before walking into the MoMA for the premiere of his latest film, “Mr. Holmes.” His personality shone through his red carpet look: a suit paired with pristine white Converse shoes, a white and black ikat shirt, and a long colorful camo-print scarf tied loosely around his neck.

So, will Mr. McKellen perhaps be attending any men’s shows this week? “Come on,” the actor snapped back. “We’re here to talk about the movie.”

All right, then: “Mr. Holmes” is a new take on an old theme. McKellen portrays a post-retirement Sherlock Holmes, and the old gumshoe is racing the clock of death to finish writing his final story without the help of his longtime assistant, John Watson. His assistant this time around is instead the young son of his housekeeper, portrayed by Laura Linney, a longtime friend of McKellen’s. While the film marks their first time working together on-screen, McKellen and Linney were lured into the project by director Bill Condon.

“Bill Condon asked me to do it, and I will do anything that Bill asks me to do,” Linney divulged. “Ian and I have known each other for a long time but we’ve never worked together so that was an added bonus. It was spectacular working with Ian. He’s kind, and creative and mischievous and delightful and serious and funny — he’s all of those things.”

Which is likely why he was tapped for the role. “I realized what a marvelous part it was because I played two Sherlock Holmes — I played a younger one and the old one, that’s a lovely challenge for an actor,” said McKellen of the film, which oscillates between the present and flashbacks. “The fun of this story is the Holmes we think we know wasn’t a real person. I can’t remember a time when I didn’t know who Sherlock Holmes was. He was just there.”

A crowd with deep theater credentials came out for the premiere and after party, including Alex Sharp, Lena Hall, William Ivey Long, Montego Glover, Terence Winter and John Buffalo Mailer. With McKellen firmly in the theater and film camp, Reinaldo and Carolina Herrera held up the fashion presence.