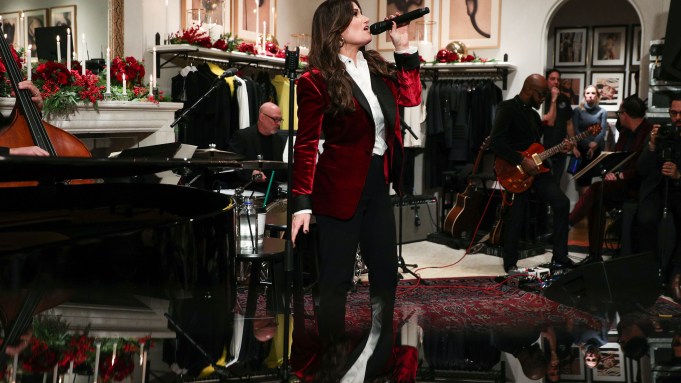 “I feel like a little gift wrapped up in a bow,” said 22-year-old actress Kathryn Newton as she twirled in Ralph Lauren’s red-and-black “tartan self-tie” dress. “Well, two bows.” She turned, revealing the details of the open-back garment.

“I walked into the store yesterday for my fitting, and I was like, ‘This is what Christmas feels like,’” she continued. It was Wednesday night inside Ralph Lauren’s holiday party at the Rodeo Drive flagship in Beverly Hills. “I tried on a bunch of dresses, some from the new collection, too, but with this one I was like, ‘I need to wear this,'” said Newton.

The actress — who got her break playing Reese Witherspoon’s daughter in “Big Little Lies” and stars in Netflix’s “The Society” — had just finished shooting an untitled thriller with Vince Vaughn.

“I wrapped four days ago,” she said of the project, directed by Christopher Landon. “Vince and I swap bodies in it. Vince is amazing. We really collaborated. I’ve never had such a good experience on a film.” It’s been a busy year, and come February, she’ll be on yet another set. “It’s a movie that hasn’t been announced yet,” she said, unable to share more. “And as soon as I wrap that, I’m going to film season two of ‘The Society.’ But before that, I’m doing a Ralph Lauren campaign.”

The actress, who wore the American label to the Emmys this year, has been developing a relationship with the brand. Over the summer she attended the U.S. Open as a guest of Ralph Lauren.

“I was a golfer before I really was even an actor,” she said. “I have pictures of me in Polo [Ralph Lauren]. So, to be the first woman actress who’s part of their Polo campaign is a really big deal, and I’m so honored, because the brand has always been a part of my life. It’s cool for it to come full circle like that. My dad’s really freaking out.”

It was a family affair inside the shop, where friends of the brand — and their kids, entertained with candy and coloring books — were invited to shop, mingle and treated to a performance by Idina Menzel.

The Tony Award-winning singer belted holiday classics like “It’s the Most Wonderful Time of the Year” and, much to the delight of the youngsters in the room, ended the night with her hit song, “Let It Go” from Disney’s “Frozen.”

“Are you going to help me sing this?” the Broadway star, who voices the role of Elsa, asked the audience as the children’s eyes widened. Standing among the crowd were Mindy Kaling, Camilla Belle, Storm Reid, David Corenswet, Elizabeth Chambers and Sylvester Stallone’s daughters, actress Sistine, Scarlet and Sophia.

“I went to school with those girls,” exclaimed Newton before embracing the three as they made their entrance.

“Can I get a photo?” asked a photographer.

As they struck a pose, Newton turned to the sisters: “I feel like we’re at prom all over again.”