The actor spoke to WWD about his second iteration of Idris Elba x Superdry on Monday morning. 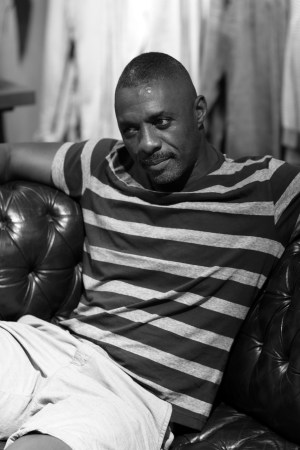 “I’m not just putting my name on it,” Idris Elba says, echoing the defense mechanism drawn on by virtually every celebrity who does a fashion collaboration. It’s Monday morning and the actor is perched on a tufted leather soda in the new Superdry store. The store, which opened last week, is the first New York retail space for the British brand, occupying a particularly heavily foot-trafficked section of Herald Square. Elba is surrounded by his collection and is, curiously for 10:30 in the morning, chewing on a tuna sandwich.

It’s the second round of Idris Elba x Superdry and he’s in town to talk to press about his spring lineup. It’s a mix of classic and street with tastefully logo-laden hoodies, gray cotton jogger shorts, and cashmere crew necks in forest green, blackcurrant and pale blue. The perforated leather bomber and buttery leather moto are statement pieces, and Elba is particularly proud of the latter. “This reminds me of the Fonzie jacket,” he says, pointing to the moto. “It’s based on Indiana Jones, though; it’s that old action movie vibe. It’s super tailored, really cool and just looks good.”

In terms of overall direction, the lineup is meant to be very functional and very male-friendly (read: low maintenance). “It’s so simple and easy. You wear it from your work, then to dinner and to drinks afterward and you still look good and feel cool,” he explains.

But fashion isn’t the only reason Elba is in New York. He’s also in Manhattan to promote the summer juggernaut “Star Trek Beyond,” in U.S. theaters Friday. “It’s a real honor to be asked. ‘Star Trek’ is like a big cornerstone of some of my TV watching as a kid. One of the first sci-fi shows that had a mix of a diverse cast,” says the actor, who plays the villainous Krall in the film. “When I got asked to do it, to play a villain and work with J.J. Abrams and Justin Lin, it was a real compliment. It has such a big audience, and I was a bit nervous. They love ‘Star Trek,’ and all the villains get scrutinized [by the super fans].”