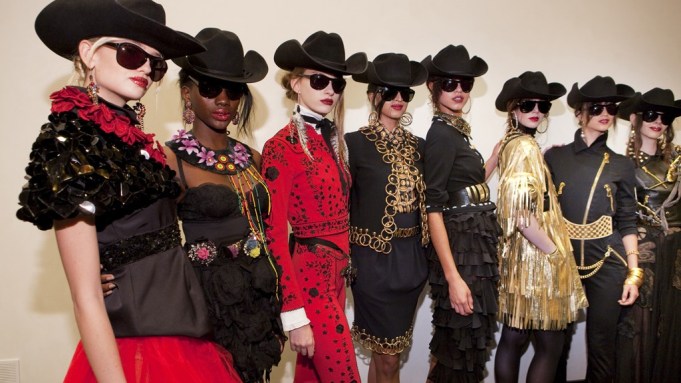 CHICAGO — Outgoing Moschino creative director Rossella Jardini was in Chicago last week to fete the brand’s 30th anniversary. During the three-day visit, Jardini appeared unawares that management at Aeffe SpA, the Italian company that controls Moschino, had already made the decision to replace her with Jeremy Scott.

Jardini flew back to Milan on Saturday, along with Bill Shapiro, her design assistant, presumably to the news of her ouster. It had been her first trip to the Windy City and her swan song representing Moschino as its designer.

Ikram Goldman, founder of the influential Ikram boutique, and her husband, Josh Goldman, hosted a dinner party Thursday for 70 guests in honor of the Moschino anniversary. Ikram has been a top customer of the brand in the U.S. since the store opened its doors nearly 13 years ago, first in a smaller location and now in its two-level, 16,000-square-foot incarnation.

“When Franco [Moschino] died, nobody believed that the brand would be able to survive. Because of his charisma and his personality — everybody believed he would be irreplaceable,” said Jardini, who took the creative reigns from her mentor when he died in 1994 at the age of 44. “Franco was filled with incredible talent and I was able to acquire the tools of the trade through my experience with him. Everything that we have done is a continuation of what Franco accomplished. In a way, it was a selfish way of keeping him alive.”

Ikram praised Jardini’s seamless continuation of the Moschino legacy. “It’s never veered off and there’s something truly remarkable about that,” she observed.

“Ikram is such a force in the industry and someone who has really profoundly understood this brand. I couldn’t think of anyone else we would rather celebrate this anniversary with,” said Michelle Stein, president of Aeffe USA, of the decision to mark the Italian brand’s anniversary in the heartland of the Midwest. In June, Moschino traveled to Shanghai for a celebration in another distinctive locale, replete with a runway show.

Dinner was in the store’s cozy, candlelit restaurant on the upper level. The dining spot has become a hub of fashionable entertaining for the gregarious and voluble Goldman. “We’ve held a lot of parties — for Jack [McCollough] and Lazaro [Hernandez of Proenza Schouler], Thakoon [Panichgul], Laura and Kate Mulleavy of Rodarte, Peter Coppings from Nina Ricci, Isabel and Ruben Toledo,” she reeled off.

Josh Goldman is a partner in the business and has the sensible mien of a real estate attorney, which he was earlier in his career. But the former lawyer was sporting an intricately textured Comme des Garçons blazer and rhapsodized enthusiastically about Undercover’s Jun Takahashi and the cutting skills of Azzedine Alaïa.

“I don’t like sports analogies but it’s appropriate here. [Ikram] is the quarterback, the wide receiver and the running back. She’s all the skilled positions,” he explained of their working partnership. “I’m like the defensive line. I do accounting and legal and fight fires.”

Rogers, the former White House social secretary and now the chief executive officer of Johnson Publishing Co., has been friends with Ikram for two decades. “She takes life and rides it. She’s always on top of her surfboard and always riding out in front. I love that about her,” she said, perched on a sofa in a makeshift nightclub that was swathed in red velvet curtains, installed for after-dinner dancing.

Like Rogers, Goldman has a White House connection, having previously been in charge of First Lady Michelle Obama’s wardrobe. She dressed her famous client in Moschino on several high-profile occasions — but ask her about that relationship and it’s the first time Goldman clams up, tightly pursing her lips and then scolding the nosy interlocutor for mentioning the FLOTUS.

Apart from fashion, Ikram’s latest obsession is the movie “Ender’s Game,” which she had seen at a private screening the night before and raved about for a hefty chunk of dinner. Abby Pucker, whose mother, Gigi Pritzker Pucker, is the film’s producer, works part-time at Ikram when she’s not attending Columbia University. The younger Pucker left the post-dinner party on the early side to finish her homework downstairs, as revelers continued dancing.