It was date night for Iman and Pierpaolo Piccioli and Drew Barrymore and Stella McCartney at the 4th annual WWD Honors. 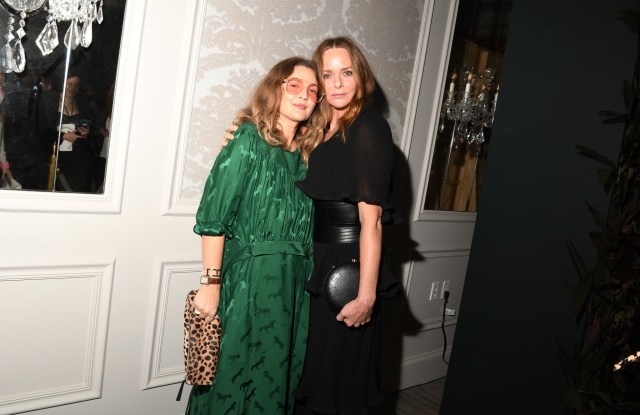 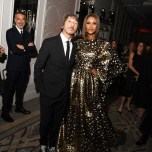 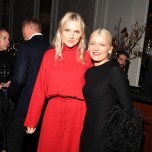 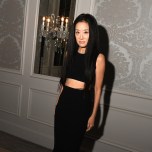 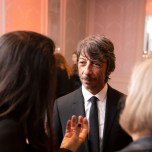 The fourth annual WWD Honors kicked off Tuesday evening in Manhattan, with a cocktail hour and dinner paired with the awards portion of the night. Giorgio Armani was recognized with the John B. Fairchild honor; Stella McCartney was awarded this year’s Corporate Citizenship award; Pierpaolo Piccioli of Valentino was awarded the honor for Women’s Wear Designer of the Year, and Kim Jones of Dior the honor for Men’s Wear Designer of the Year, among other honorees.

“Oh, my God, I feel like we were born from the same egg!” McCartney said of her date for the evening, Barrymore. The designer said her approach to dressing women on the red carpet has remained consistent throughout her career.

“I want women to feel really, really good about themselves when they’re wearing Stella. It’s never really veered off that,” McCartney said. “I try to accommodate confidence and let them say who they are through what they’re wearing. As a designer and as a female designer, it’s important for me to not dress women but for them to wear my clothes themselves.”

Rhoda was dressed in Stella for the night, and championed the designer’s commitment to sustainability.

“She really pioneered that in this industry a long time ago, before anyone else was thinking about that,” Rhoda said. “She’s helped changed this industry.”

Her first time wearing the designer was when she was around 19 years old, walking her runway show in Paris.

Hilton Rothschild wore Valentino for the night and came running back to the red carpet once Mr. Piccioli arrived to embrace him.

“I just think he has the most beautiful eye,” she said of Piccioli. “No one does couture like him.” The socialite chose a Valentino gown for her wedding day in 2015, a process she said took five to six fittings to complete.

“The Valentino team joked that my dress had more air miles than [anyone],” she said. “But that was the most fun part of the whole wedding thing: the fittings. Having an excuse to go to Paris!”

Though he was home in Milan under the weather, Giorgio Armani’s praises were sung on the red carpet by the many who had come to honor him.

“Strength. Femininity. Class. Ease,” Rossum said of what the brand name signifies to her. Her standout Armani moment was the red dress she wore to the Golden Globes in 2016. “It was between two dresses and the other one was purple and beaded, and I went with the red, ultimately, because it was so strong and simple, just a simple column dress,” Rossum said. “Armani’s tailoring is just impeccable and always makes me feel incredibly strong.”

“I love Armani Nineties minimalism,” Young said. “I’ve been buying tons of Armani suits on The RealReal. I feel like all the trendy brands are just doing old Armani, and it feels so right. The fabric is amazing the quality is amazing, the tailoring is so beautiful.”

“I haven’t known him but I have been an editor, so I definitely went to his shows in Milan,” Wang said. “He’s one of the pioneers of modern clothing. I mean he deconstructed a jacket, which no one had ever done before him. He worked in a palette that was very Milanese.”

“The name Armani signifies to me continued luxury in both the men’s wear and women’s wear market,” Bode said. “I think it’s often hard to sustain, and Armani has continued to sustain that.”

“Breathe in, breathe out,” said Rossum to Roberta Armani, who accepted the John B. Fairchild Honor on behalf of her uncle and was trying to conquer stage fright. Trying to calm her nerves, Rossum joked: “Let’s put a little more pressure on you, why don’t you go up there and sing something in German?”

Roberta Armani eventually made it through well – without singing. “I so wanted to do a good job for my uncle,” she said, taking her seat, after recounting how the late legendary editor was once disappointed in Armani for inviting 700 guests to a dinner in Milan, saying there “were a few too many. My uncle thought he was a brilliant and clever man.”

Piccioli, flanked by Iman, enthused about his job. “The more I did it the more I needed to do it,” he said of “translating his emotions and dreams in his job.” As if he weren’t busy enough with his collections for Valentino, Piccioli is in the midst of curating A Magazine.

Jones was among those who kept their remarks brief. “Thank you to Mr. Arnault who trusted me to start with Dior, I absolutely love it. And I have such a great team that I work with that makes every day a joy to do it,” he said.

Josh Luber, co-founder of, StockX which was honored as Best-Performing Retailer — Small Cap, took just a moment to look back and accept the award and then refocused on the future. “It’s good to be recognized for the work that we’ve already done, but it’s like day zero over at StockX. We are just getting started. We’ve taken how the stock market works and applied it to consumer goods…Imagine a world without retail price point — not every product, but a lot. Any product that’s truly supply and demand constrained. Any product that you ask the question, ‘What is this worth?’ That’s what we’re doing, variable pricing.”

Raissa Gerona, chief brand officer of Revolve, the publicly-traded contemporary e-commerce platform, accepted the award for Best-Performing Retailer – Large Cap and said, “We’re proud to have pioneered the influencer marketing space and today have a network of over 3,500 global ambassadors who help promote our product every single day. Thank you to our over 500-plus designers for helping us create a trusted, premium online destination. Last but certainly not least, thank you to our employees – the over 1,100 people who work out of Cerritos.”

Gregg Renfrew, chief executive officer and founder of clean beauty brand Beautycounter, winner of Best Performing Beauty Company – Small Cap, took a red eye in from Los Angeles, where she and her family have been evacuated from their home because of the Getty wildfire. “Don’t blame our products for the bags under my eyes,” she joked, adding that when her daughter asked why she had to go to New York, she told her, “Because we won the Academy Awards of the fashion and beauty industry!” Accepting her award, Renfrew ended with a plea to the industry: “Clean beauty is the now and the future.”

Tracey Travis, the chief financial officer for the Estée Lauder Cos., which won Best Performing Beauty Company – Large Cap, touted Lauder’s strong financial results as she accepted the company’s award. “I am going to be corporate for a moment, so Stella, please forgive me,” Travis joked, after  McCartney had mentioned she’s rarely involved with things that have “corporate” in them.

“I’m really proud about what we’ve delivered … but I’m actually more proud about how we do it,” said Mary Dillon, the ceo of Ulta, who won the Edward Nardoza Honor for CEO Creative Leadership. She credited the company’s more than 45,000 employees, and said that Ulta’s strong results are a result of common purpose, values-based leadership and the power of believing that beauty truly is limitless.