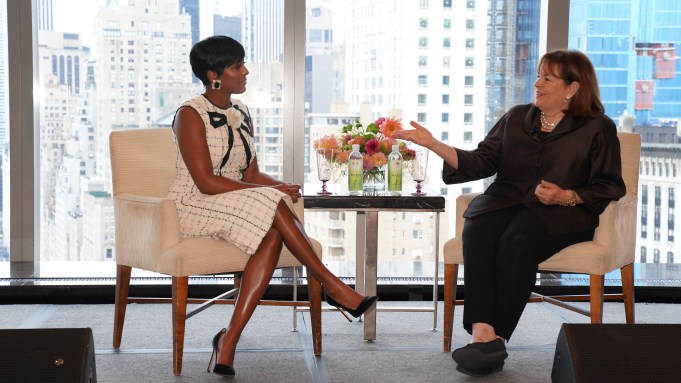 This year’s Central Park Conservancy Women’s Committee fall luncheon was its most popular yet — it sold out in record time and raised more than $360,000 — and welcomed a particularly popular guest speaker to match.

It seemed that everyone inside the Mandarin Oriental ballroom had reason to gush over Ina Garten, who joined Tamron Hall onstage after lunch for a conversation. Hall greeted the chef — whose latest cookbook, “Cook Like a Pro,” comes out next week — by showing her an Instagram of the apple pie she’d baked the night before, her first ever. (Yes, the recipe came from one of Garten’s cookbooks.) Other guests clamored for a selfie, describing Garten as their idol, before sitting down for a meal of asparagus, salmon and roast vegetables. Another claimed that Garten’s cookbooks had taught her how to cook.

The love for the Women’s Committee was mutual.

“I get asked to so many things I can’t possibly do them all, but when Central Park came through I said, ‘I’m doing that,'” said Garten before lunch. “It’s such a great resource for New York; it’s for everybody. Everybody who comes here comes to Central Park.”

Garten may live out in East Hampton, but she still takes advantage of the city’s public park whenever possible. “I go on little walking tours everywhere,” she said. “I love the Bethesda fountain, it’s gorgeous; every once in awhile I’ll find myself in the brambles and think, ‘Oh my gosh, I’m in an episode of ‘Law and Order.'”

Favorite recipe from her new book? “We’ve made a fig and ricotta cake like a million times. There are a few things we kept testing over and over again not because we needed to retest it, just because we wanted to eat it for lunch. The chicken and spinach Waldorf salad we made a lot; also I love the frisee salad with chickens and potatoes — it’s like a meal in one dish.”

Lessons from her 1978 stint at the White House? “My time at the White House taught me what I don’t want to do. When I was there I felt like nothing ever happened, it was the same thing over and over again. And that was the Seventies. Can you imagine now? I mean nothing happens.”

Her go-to music for cooking? “Taylor Swift. And trust me, the people who work with me are really sick of it.”

One (make that two) items in her kitchen she can’t live without: “Good knives, and have sheet pans.”

The last business decision that frightened her? “I think it would be TV. I said no for years, and the Food Network just kept coming back.”

The one meal to cook? “I just think the most satisfying thing is a roast chicken with vegetables.”

Her mantra? “Have a really good time. I heard somebody say, ‘if it’s not fun, it’s not done.'”