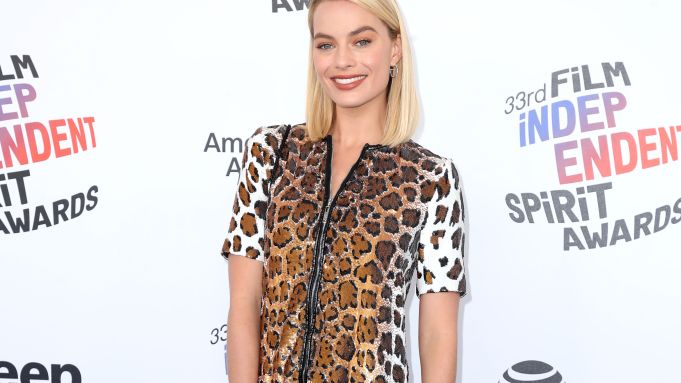 “Thank you so much for seeing it,” Salma Hayek said when someone told her they loved her film “Beatriz at Dinner.” The actress — flanked by husband François-Henri Pinault — was walking the blue carpet at the Independent Spirit Awards,which took place inside a tent alongside the beach in Santa Monica, Calif. “Bring your coat. It’s cold!” she admonished him as she quickly put hers on after posing for photos.

Hayek was nominated for her role as a holistic medicine practitioner in the comedy/drama that also stars John Lithgow, Connie Britton, Jay Duplass and Chloë Sevigny. “I’m not going to win,” Hayek said of her nomination, “but I already won by being here.” (The award went to Frances McDormand.)

Asked if Hayek thought change is around the corner for women, she said, “I think it’s coming our way, slowly but surely.” She added, “It’s time to grow and better ourselves and learn new things. It’s an emotional moment.” She said the Time’s Up movement will be addressed in some capacity at tomorrow’s Academy Awards ceremony. “Not just words, but [through] actions,” she said, cryptically, in Spanish.

Pinault stood proudly by Hayek’s side as she completed interviews and even held a reporter’s recorder for her when she wasn’t within reach of a group interview being conducted with Hayek in the distance.

“It’s Missoni,” Washington said of her floral dress while putting on a bomber jacket after taking pictures with Amanda Seyfried. Nearly everyone wore coats between photo opps.

Betty Gabriel, who will be attending the Oscars tomorrow for “Get Out,” which ended up winning Best Feature, also wore a stylish jacket over her Tadashi Shoji dress. “I wouldn’t be able to speak right now if this wasn’t keeping me warm,” Gabriel laughed. “I’m like, ‘Are we in California or are we in Alaska?’”

Gabriel said people often forget that the Oscar-nominated film was actually an indie film made with a limited budget. “It felt very much like a labor of love because we weren’t getting paid that much,” she admitted. “But what’s crazy and what makes it not feel like an independent is that it looks expensive. Jordan worked his magic, but it was definitely made for very little money.”

Gabriel said she’s been having a lot of fun with the awards circuit. “I’m like, ‘Hey, Gary Oldman for the third time. Hey, Allison Janney. Again. Nice dress. Again.’ I’m just so excited to celebrate Jordan tomorrow and all the other wonderful people I’ve actually gotten to meet this season.”

Haley Lu Richardson, whose film “Columbus” was nominated for Best First Feature, attended in a delicate, but revealing, dress by Zimmerman. “I’m a little exposed,” she laughed, looking down at her dress’s deep neckline. “But at least it’s long-sleeved. It’s beachy and flowy and breezy. And now I’m getting a breeze.”

Backstage, Best Supporting Actress winner Janney, who — like McDormand — has been sweeping the major awards shows, discussed the role costume design played in creating her “I, Tonya” character. “It helped everything because I look to the costume designer’s vision of who [the character] is,” she said. “Seeing what they bring to the table informs what I do.”

As for how she thinks Jimmy Kimmel will do as tomorrow’s Academy Awards host and if she thinks he’ll address the Time’s Up movement, Janney said, “I think Jimmy Kimmel has a huge task at hand to host the Oscars and I know he’s going to do a fantastic job. I think that the movement is being ingested in so many other ways that I couldn’t begin to judge whatever he’s doing. I’m just going to leave it in his capable hands.”