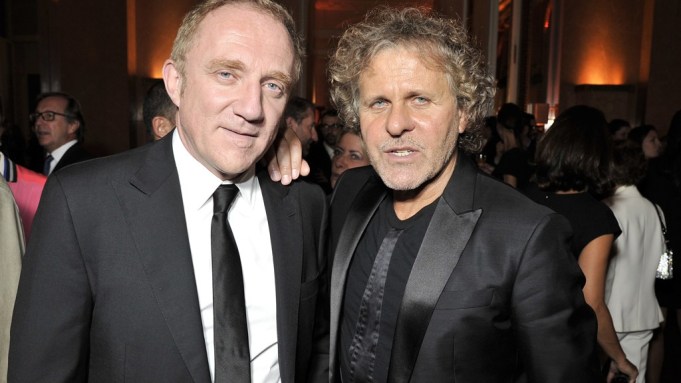 TALENT SHOW: The guest list at Friday night’s party to celebrate 25 years of the ANDAM prize and officially present the awards to this year’s winners read like a Who’s Who of fashion.

While the event was a formal occasion that saw France’s new minister of culture Fleur Pellerin opening the speeches and promising support for the industry, the cocktail party felt like a family reunion, as designers mingled, dressed in a variety of looks, ranging from black tie to streetwear.

Mattiussi had his black bomber jacket zipped all the way up to his Adam’s apple. “I feel comfortable in it, and I don’t look bad,” he mused.

Charlotte Dellal poured herself into an off-the-shoulder lace column by Alessandra Rush, but your eyes went to her mismatched Delfina Delletrez earrings: one dangling an eye, nose and mouth.

“I like strong noses,” she pronounced, lifting hers in mock haughty fashion.

Surrounded by the likes of Dellal and Gareth Pugh, Mary Katrantzou confessed she was smitten by the various and rich English accents, but the Greek-born designer fears she still sounds American, despite a dozen years living and working in London. “I’m trying to cultivate an accent,” she confessed, training her smart phone on a chocolate orb dessert that dissolved once a waiter poured hot sauce over it.

Dufour marveled how Paris, while always a cradle of fashion creation, has become more business savvy. And she sidestepped any political landmine by opting not to wear anything by a past winner. (For the record, she wore current Rochas, by Italian designer Alessandro Dell’Acqua.)

Designers milling around the Hôtel Potocki venue, home to the Paris Chamber of Commerce and Industry reminisced about their wins. “I was able to do my very first show thanks to ANDAM,” said Lacoste designer Baptista, who has twice been recompensed with the prize.

Yurkievich, who won back in 1998, when the financial gain was significantly smaller than the 250,000 euros, or $318,000 at current exchange, that this year’s laureate Iris Van Herpen receives, said “For me it was less financially helpful than it is now, but still it was great.”

Bergé had a few words of warning for the rising talent the prize rewards, however.

“I’m worried that they will go down the wrong route,” he said. “Fashion exists because of all these young designers […] But the people who do fashion best today are people like Zara and H&M. That’s fashion to me. You need to offer the price that goes with the product and stop dreaming.”