Tom Ford and Miuccia Prada were among the recipients. 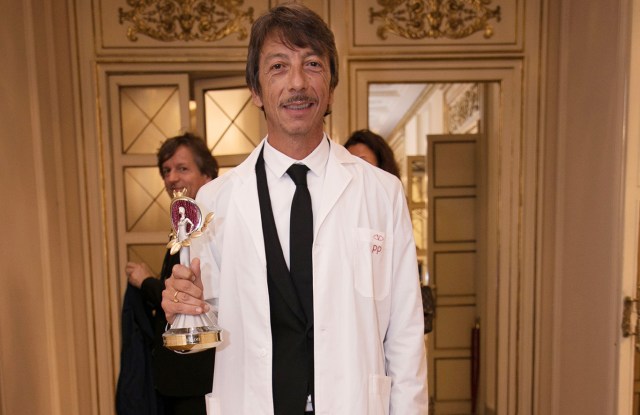 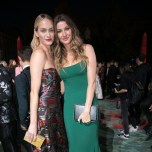 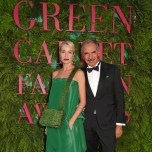 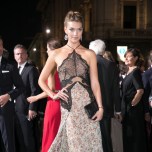 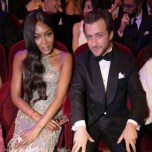 MILAN – “Rome was not built in a day, and neither was Milan,” said Livia Firth, founder of Eco-Age, accompanied by Carlo Capasa, president of the Italian Chamber of Fashion, on stage to introduce the Green Carpet Fashion Awards, Italia ceremony. “This is the beginning of a new era. We have a beautiful future together. Tonight we celebrate provenance and sustainable innovation. We also celebrate the handprint — the millions of people who work in supply chain at every level and the brands which have been working to preserve sustainable production. But mostly — tonight — we celebrate what fashion should really be, and that is not fast, not disposable and not made by invisible people, in un-transparent supply chains. Tonight we celebrate you.”

Here, are the winners of the inaugural awards:

• Colin Firth presented the Community and Social Justice Award to Brunello Cucinelli, who has restored the medieval village of Solomeo, the headquarters of his company, and championed restoring dignity to work.

• Annie Lennox, founder of The Circle NGO, which will receive the proceeds of the event, rewarded Valentino’s seamstresses, accompanied by the brand’s creative director Pierpaolo Piccioli, with the Art of Craftsmanship prize. “They allowed me to dream,” said Piccioli, handing over the prize to the seamstresses, who arrived from Rome and were wearing their white smocks.

• Tom Ford was granted the Best International Designer Supporting Made in Italy prize, which was accepted on his behalf by Andrew Garfield. Ford has worked with Italian suppliers since his Gucci days and continues to do so for his namesake brand. “I am the creative genius behind the Tom Ford brand,” joked Garfield. In a humorous video, Ford thanked the jury in Italian, pulling faces and repeating the most difficult words. Anna Wintour handed over the prize to Garfield and, citing Ford’s renowned attention to detail, she called the designer her “secret hairstylist,” who would go as far as picking up a comb to fix her hair. Wintour said that Ford does not only think outside the box, “he lives outside the box. We need designers like that now more than ever.”

• Italian actress Vittoria Puccini presented the Artisanal Laureate Award to Chiara Vigo, the only master sea-silk weaver in the world, following a process taught to her by her own grandmother.

• Italian actress Stefania Rocca and model Bianca Balti awarded the Social Laureate Award to Carmina Campus, founded and designed by Ilaria Venturini Fendi. “I started 11 years ago and I honestly thought [sustainability] would move faster. This is the perfect audience that can make a difference. I expect a lot from you,” said Venturini Fendi.

• Gisele Bündchen received the Vogue Eco Laureate Award from Vogue Italia editor in chief Emanuele Farneti for her work on the preservation of the Amazon biome in her native Brazil. Bündchen was wearing a green Stella McCartney gown and the English designer congratulated her via a prerecorded video clip.

• Last but not least, in the style of the Oscars, Colin Firth returned to present the final award, the CNMI Recognition of Sustainability, to Giorgio Armani, Alessandro Michele, Piccioli and Miuccia Prada, who all took to the stage, for supporting the Sustainability Roundtable, which “no other Fashion Chamber in the world convenes,” said Firth.