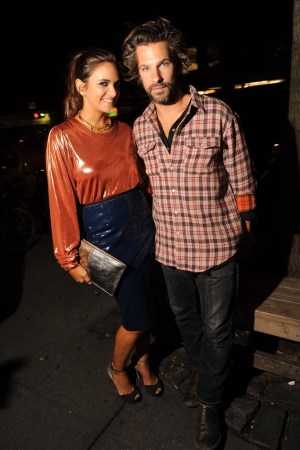 Padma Lakshmi was sitting down at the West Village restaurant RedFarm on Tuesday night explaining her DIY-bent when it comes to perfumes, when she abruptly offered up her wrist.

“I just make it for myself and my girlfriends; it’s quite expensive,” she said, then noticed there didn’t seem to be much scent emanating from her arm. She tended to use organic ingredients, she explained, which lack in staying power.

Luckily for Lakshmi, dinner was in honor of Ben Gorham, founder of the Stockholm-based fragrance purveyor Byredo.

“I’m interested in Ben,” she said. “He’s going to introduce me to his suppliers.”

Judging by the guests in the room, Gorham is a well-connected man. The photographers Inez van Lamsweerde and Vinoodh Matadin were hosting in his honor, and the small room contained Johan Lindeberg, Shala Monroque, Laure Heriard Dubreuil and Aaron Young, Olivier Zahm and Christiaan Houtenbos. As guests began meandering toward their seating assignments, Cate Blanchett arrived, fresh from the set of Woody Allen’s latest film.

“He’s a friend of a friend of mine,” Blanchett said of Gorham. “He’s very clever….It’s hard to be unique without being pretentious and there’s not an ounce of pretension in him….And we finished shooting at three o’clock, we were in Nyack or somewhere so I just thought I could come out.”